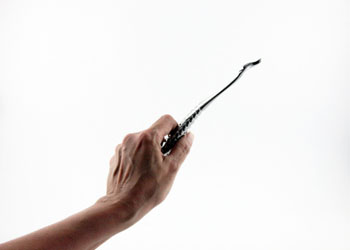 The Pathfinder Guide system is a surgical tool that improves graft positioning during ACL reconstruction, designed so that the anchored grafts can handle a similar level of stress as a natural ACL. The major part of the system, the Pathfinder ACL Guide, is organically shaped to match the anatomy of knee, and includes an elongated, slim body section and an ergonomic handle. To achieve the necessary biocompatibility, the Pathfinder is printed with Inconel 718 material to provide the correct surface finish and oil resistance.

The majority of ACL repair surgeries are performed with the transtibial technique, which involves drilling a tunnel through the front of the tibia head, which is also the tibial attachment point for the graft. A drill is then extended through the tunnel and up to the back of the femur to create a similar tunnel for the femoral attachment. While the technique is relatively straightforward, it often results in the graft being attached to the femur off the natural attachment point, leading to biomechanical strain and increased potential for graft failure.

“The main problem is doctors are using a straight drill to create the tibia and femur attachment points for the graft, but instrumenting through the rigid tibial tunnel limits where you can get on the femur,” said Pathfinder inventor orthopedic surgeon Dana Piasecki, MD. “I realized I needed a procedure in which the drill is flexible and could be bent to follow the ligament’s normal path to impact the femur at the location and angle that anatomically mimics native ACL positioning. I then needed a tool that could be inserted into the inner knee space to grasp the flexible drill, steer it to the proper spot on the femur, and hold it during the drilling process.”

To facilitate that graft positioning, the pathfinder Guide incorporates a slotted groove for capturing and holding a 2.2-mm diameter flexible drill that can easily disengage with a simple twist of the tool, and a curvilinear head section that enables the surgeon to reference inner knee surfaces, turn and manipulate easily within the limited space, and rigidly hold position against bending and drilling forces. Different models were designed to accommodate for both left and right knees, as well as for children’s knees, which are considerably smaller.

After fused deposition modeling (FDM) design process, Dr. Piasecki turned to Stratasys Direct Manufacturing (Los Angeles, CA, USA) to fabricate the parts via DMLS, since it was the only manufacturing process that could build the intricate geometry in metal at a reasonable price for low-volume production and meet the necessary mechanical requirements. After extensive testing, the Pathfinder System was approved by the US Food and drug Administration (FDA), and has shown a 95% success rate in anchoring grafts in their native ACL locations.

“Pathfinder illustrates how 3D printing is uniquely capable of enabling breakthroughs in medical technology that otherwise would not be possible,” said John Self, project engineer at Stratasys Direct Manufacturing. “And by offering 97% cost savings over conventional manufacturing methods, 3D printing has demonstrated its business value in bringing complex, high-quality parts to market.”