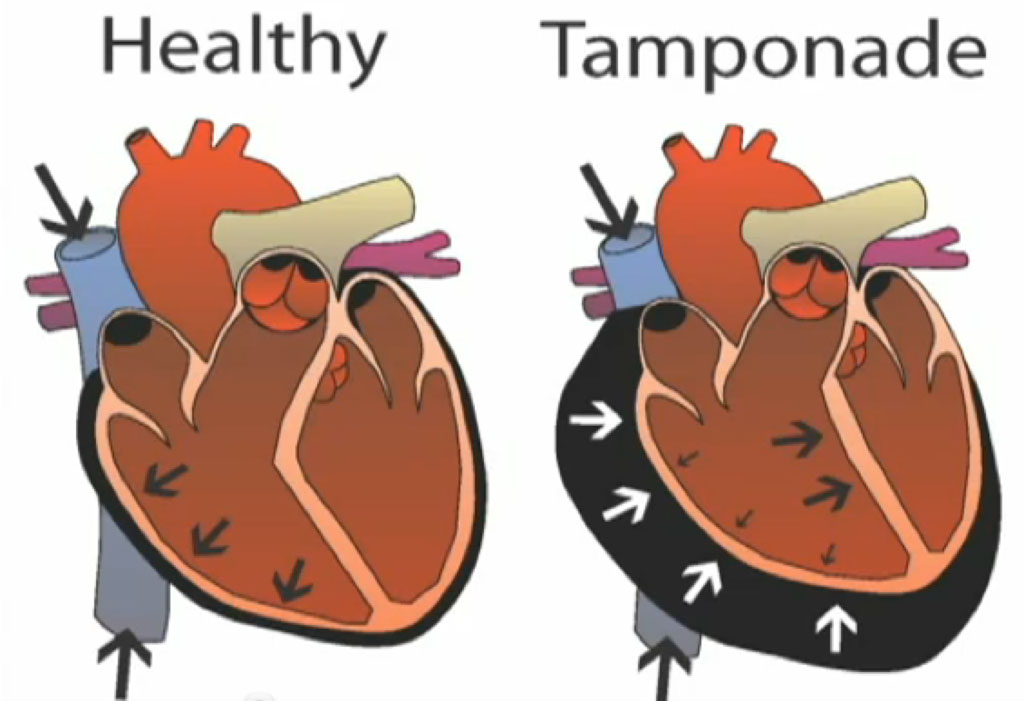 Image: A comparison between a healthy heart and a cardiac tamponade (Photo courtesy of iStock).
After treating cardiac tamponade arising from atrial fibrillation (AF) catheter ablation, pericardial drains do not need to be kept in place for an additional day, according to a new study.

Researchers at John Radcliffe Hospital (Oxford, United Kingdom) conducted a retrospective descriptive analysis study of 43 cases of cardiac tamponade resulting from complication of atrial fibrillation catheter ablation (AFCA) procedures between 2006 and 2015 in order to examine the safety of early removal of pericardial drains. The researcher compared 25 patients in whom the drain was removed early to 18 patients who underwent traditional delayed removal. Cardiac tamponade was diagnosed when pericardial effusion led to hypoperfusion and systolic blood pressure dropped below 80 mm Hg.

In cases that employed early removal strategy, the pericardial space was monitored for reaccumulation for a minimum of 30 minutes, with repeated transthoracic echocardiography. Once it reached dryness, the patient was deemed ready to leave the laboratory and the drain was left to operator discretion for removal. The delayed removal group was monitored for an extra 17 hours once no reaccumulation was confirmed. The main outcomes included need for repeat pericardiocentesis, major adverse outcomes, length of stay, and need for opiate analgesia.

The results showed that not one of the AF patients who had the drains taken out early needed repeat pericardiocentesis before hospital discharge. They also had a moderately shorter length of stay than their peers who had drain removal delayed in case of re-bleeding, and also went back on anticoagulation earlier. In addition, few patients with early removal needed opiate analgesia (8%) compared to the delayed removal group (72%). The study was published on November 15, 2016, in JACC: Clinical Electrophysiology.

“Early removal of pericardial drains after tamponade complicating atrial fibrillation catheter ablation procedures appears to be safe and effective, with re-insertion not required in this cohort,” concluded lead author Michala Pedersen, MD, and colleagues. “The traditional practice of leaving drains in situ for 12 to 24 hours may result in more patient discomfort and longer hospitalization. Additionally, there may be benefits to health economics.”

Cardiac tamponade occurs when fluid in the pericardium accumulates, resulting in compression of the heart. Symptoms typically include shortness of breath, weakness, lightheadedness, and cough. If fluid increases slowly the pericardial sac can expand to contain more than two liters; however, if the increase is rapid, as little as 200 mL can result in tamponade. When tamponade results in symptoms, drainage is necessary, by pericardiocentesis, a pericardial window, or a pericardiectomy. Tamponade due to AFCA is traditionally managed by pericardiocentesis with delayed removal of the drain (typically 12 to 24 hours later) in case of re-bleeding.