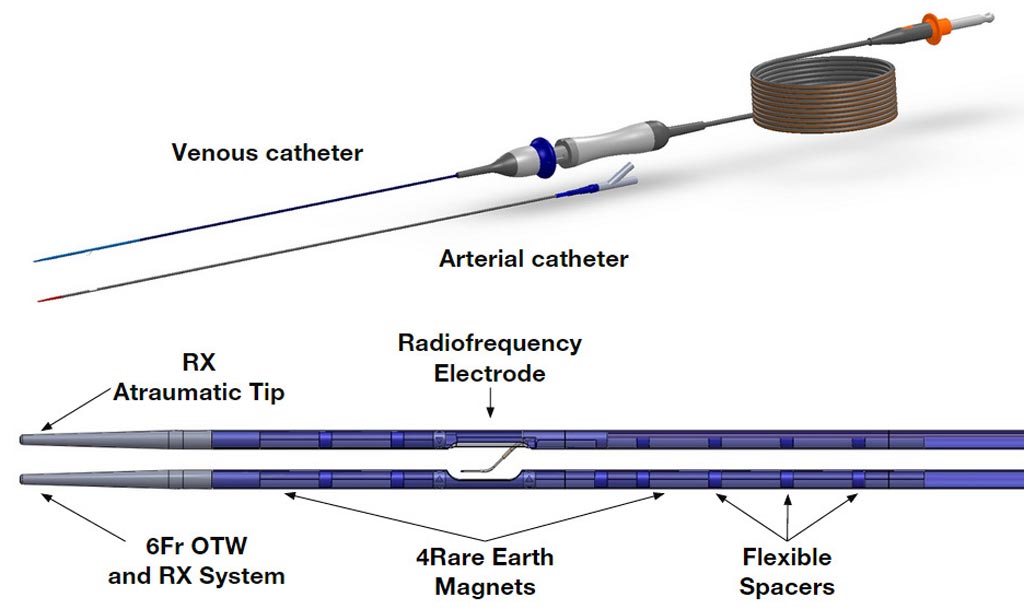 The TVA Medical (Austin, TX, USA) everlinQ endoAVF System utilizes two 6Fr magnetic catheters and a RF energy generator to create a consistent, hemodynamic AVF. The flexible magnetic catheters are first inserted into an artery and a vein in the arm. When in close proximity, the rare earth magnets in each catheter attract to each other, pulling the vessels together. After confirming alignment, a small burst of RF through the venous catheter opens an anastomosis between the artery and vein, creating the AVF. The catheters are then removed, leaving no surgical scar.

Researchers at University Health Network (UHN; Toronto, Canada; University Health Network) conducted a study in 80 patients from nine centers in Canada, Australia and New Zealand, using the system to create AVFs in 98% of participants. Overall, 1.8% of the patients suffered thrombosis or clots within three months, and 10.5% within 12 months, a lower complication rate than reported in AVFs created by open surgery. The researchers reported 12-month primary and cumulative patencies of 69% and 84%, respectively. The study was published on June 14, 2017, in the American Journal of Kidney Disease.

“The results demonstrate that the everlinQ System can create arteriovenous fistulae that are usable for dialysis and resist closure,” said senior author interventional radiologist Dheeraj Rajan, MD, of the UHN joint department of medical imaging. “This novel technology is a substantial benefit to our hemodialysis patients. We can now access veins and arteries that otherwise would not be easily accessible via surgery, and we can do this in a safe, quick way that is easy for our patents to tolerate.”

An AVF is still the most recommended access for kidney disease patients who must undergo dialysis, created by connecting a patient's vein and artery to form a long-lasting site through which blood can be removed and returned. Alternatively, in those unsuitable for a fistula, an arteriovenous graft--a plastic conduit between an artery and a vein--may be used. But many patients prefer a catheter instead, for reasons that include inadequate preparation for dialysis, avoidance of surgery, or fear of needles (since the connection to the dialysis machine via a catheter does not require needles).