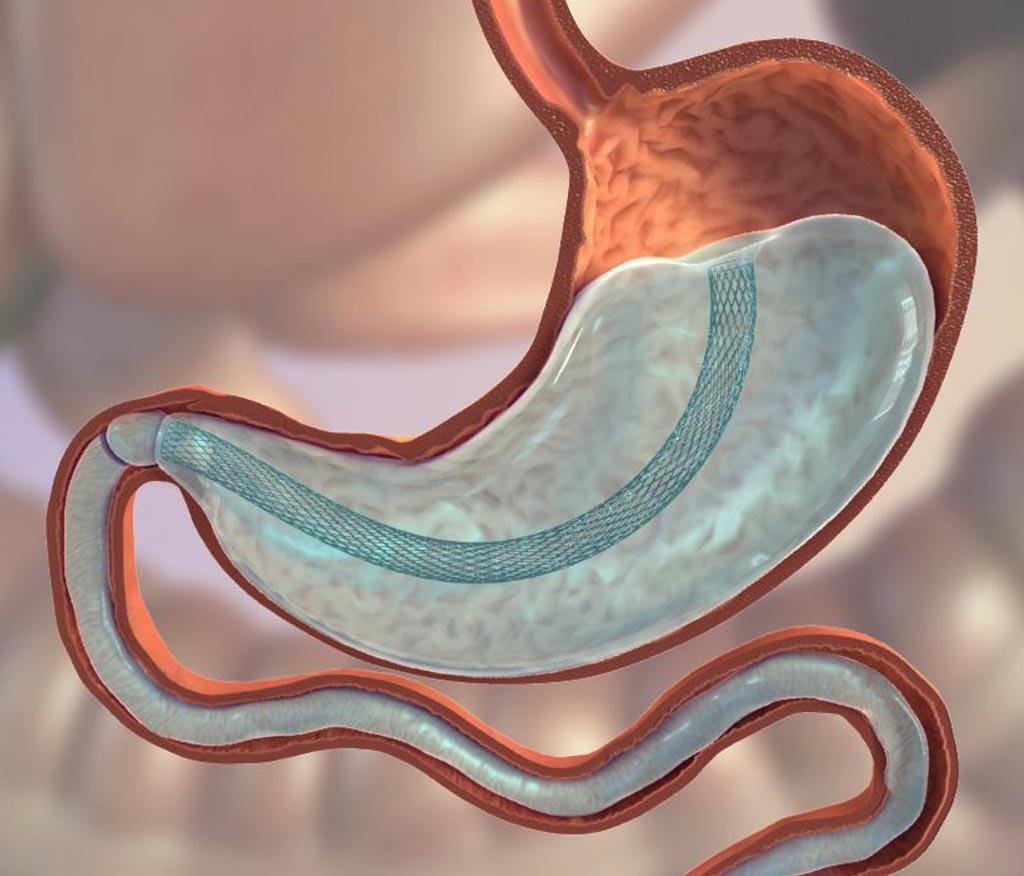 Image: The Sleeveballoon device (Photo courtesy of Geltrude Mingrone et al/ UCSC).
A new device that combines an intragastric balloon with a connecting sleeve mimics the effects of traditional bariatric surgery on people with obesity and Type 2 diabetes (T2D).

Developed at Sapienza University (Rome, Italy), Università Cattolica del S. Cuore (UCSC; Rome, Italy), King’s College London (KCL; United Kingdom), and other institutions, the Sleeveballoon device consists of an intra-gastric balloon with a central channel to allow passage of food into the proximal small bowel, which is then covered by a sleeve that extends into the duodenum and proximal jejunum. This reduces gastric volume by 2/3, while the sleeve bypasses the proximal small bowel, delivering food directly to the mid-jejunum. The device is intended for use for a period of 12-18 months.

In study to compare the effect of the Sleeveballoon and Roux-en-Y Gastric-Bypass (RYGB) in a rat model, the animals were fed a high-fat diet (HFD), with fasting insulin sensitivity, insulin signaling, and gastric emptying compared. The results revealed that both hepatic and whole-body insulin sensitivity improved, body weight and ectopic fat deposition were reduced, glycogen content in both liver and skeletal muscle was increased, and gastric emptying and cardiac function were improved in both Sleeveballoon and RYGB, versus sham-operated rats. The study was published in the August 2019 issue of EBioMedicine.

“We found that the metabolic effects of the Sleeveballoon device are similar to those of the gastric bypass, but have distinct advantages over the traditional method. In both, insulin sensitivity and heart functions improved,” said senior author Professor Geltrude Mingrone, of UCSC and KCL. “However, while gastric bypass causes a rapid rise in post food blood glucose levels which can cause hypoglycemia, the Sleeveballoon induces a slowing down of digestion, which has a steadying effect on blood sugar levels. This helps control appetite and hunger, keeping the person fuller for longer, and substantially reduces weight.”

The RYGB procedure has been the gold standard for surgical weight loss intervention for many years. The procedure usually involves laparoscopic minimally invasive surgery to create a stomach pouch from the larger stomach body. A portion of the small intestine is then connected to the stomach pouch, leaving a small opening for food to travel. The result is a sensation of satiety or fullness after eating small meals.

A new study shows how carbon nanotubes loaded with a chemical inhibitor can be used to reactivate phagocytosis of apoptotic cells in the necrotic plaque core. Researchers at Stanford University School... Read more

An allograft made of dehydrated human umbilical cord tissue serves as a barrier membrane over acute and chronic wounds. The StimLabs (Roswell, GA, USA) Corplex allograft is intended to facilitate the... Read more