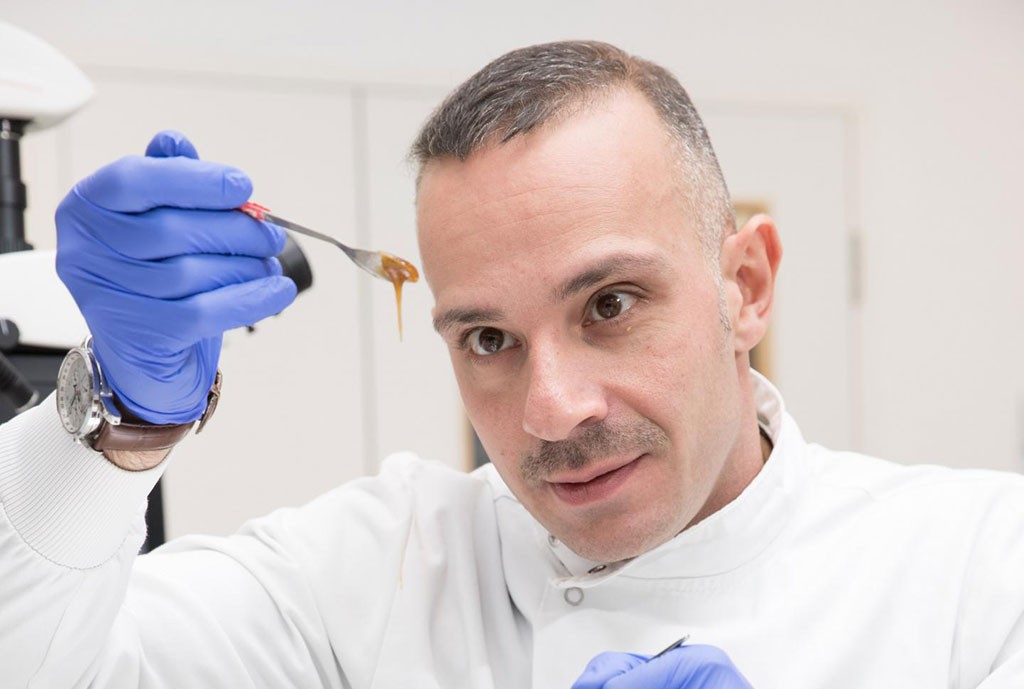 Image: Dr. Piergorgio Gentile and Manuka honey (Photo courtesy of Newcastle University)
Sandwiching tiny amounts of Manuka honey between surgical mesh layers can provide protection against bacterial infection for up to three weeks, according to a new study.

Different cell lines, including human immortalized and primary skin fibroblasts, and primary endothelial cells, were exposed to the mesh to confirm membrane cytocompatibility. The Manuka honey meshes were then exposed to various Gram-negative and Gram-positive bacteria responsible for infections in the body, such as Staphylococcus, methicillin-resistant Staphylococcus aureus (MRSA), and E. coli. The results showed that antimicrobial MH activity was dependent on the concentration used, and the strains tested. The study was published on December 4, 2109, in Frontiers in Bioengineering and Biotechnology.

“Honey has been used to treat infected wounds for thousands of years, but this is the first time it has been shown to be effective at fighting infection in cells from inside the body,” said senior author Piergorgio Gentile, PhD, of Newcastle University. “Similarly layered antibiotic-releasing coatings to protect implants against bacterial infection have been judged as failing to provide durable protection, as it could encourage the development of drug resistant bacterial strains.”

Manuka (Leptospermum) honey is made from the tree species Leptospermum, found in New Zealand and Australia. The antibacterial effect of Manuka honey is due to the presence of methylglyoxal (MGO), which forms from the compound dihydroxyacetone (DHA) present in nectar, and converted into MGO during the ripening of honey. The level of MGO in Manuka honey is 100 or more times higher than in other types of honey.