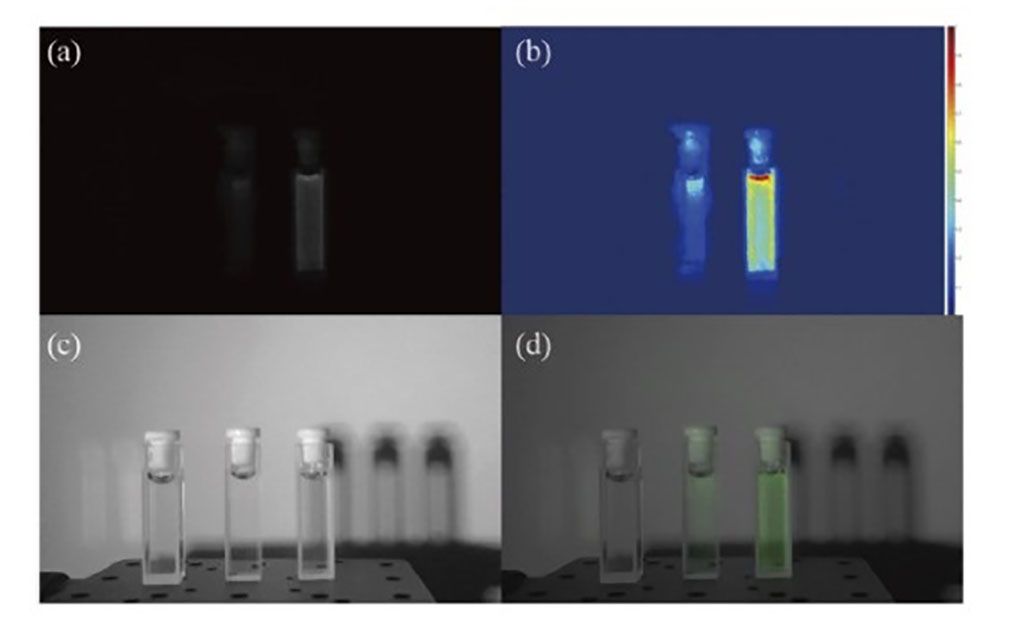 Image: Different concentrations of indocyanine green under NIR (a) visible light (b), and a fusion image (d) (Photo courtesy of Chenyoung Shi/ CAS)
A new endoscope inspired by the compound eyes of the mantis shrimp provides three dimensional (3D) visible and near-infrared (NIR) images simultaneously, according to a new study.

Developed at the Chinese Academy of Sciences (CAS; Shenyang, China), Tianjin University of Technology (China), and other institutions, the novel endoscope achieves coincident real-time imaging of 3D stereoscopic color and NIR fluorescence images. The device consists of a broadband binocular optical system, a multiband sensor, and an optical relay system that projects the two sub-images from the broadband binocular optical system onto the multiband sensor, which detects spectral and polarization responses along the electromagnetic spectrum.

The bio-inspired multimodal 3D endoscope can thus not only provide surgeons with real-time feedback, but also creates an immersive experience without impeding surgical workflow. The endoscope showed a resolution of seven line pairs/mm under visible light--matching that of current endoscopes--and four line pairs/mm under NIR. When tested on three concentrations of the fluorescent reagent indocyanine green dye (indistinguishable to the human eye), the multimodal endoscope easily distinguished among them. The study was published in the January 2021 issue of Optics Express.

“Existing fluorescence 3D endoscopes require surgeons to switch working modes during operation to see the fluorescence images,” said lead author Chenyoung Shi, PhD, of the Chinese Academy of Sciences. “Because our 3D endoscope can acquire visible and fluorescent 3D images simultaneously, it not only provides more visual information, but can also greatly shorten the operation time and reduce risks during surgery.”

Many insects have a pair of compound eyes, such as dragonflies, bees, fruit-flies, grasshoppers, and mantis shrimp, among others. The compound eye of these insects, which is a sophisticated imaging device that consists of a mosaic of tiny optical units called ommatidia, allows insects to see a different world from humans. For example, the compound eyes of bees can see ultraviolet (UV) light, making it easier to distinguish whether flowers are rich in nectar. The compound eyes of mantis shrimp can not only detect multispectral information, but also recognize polarized light.