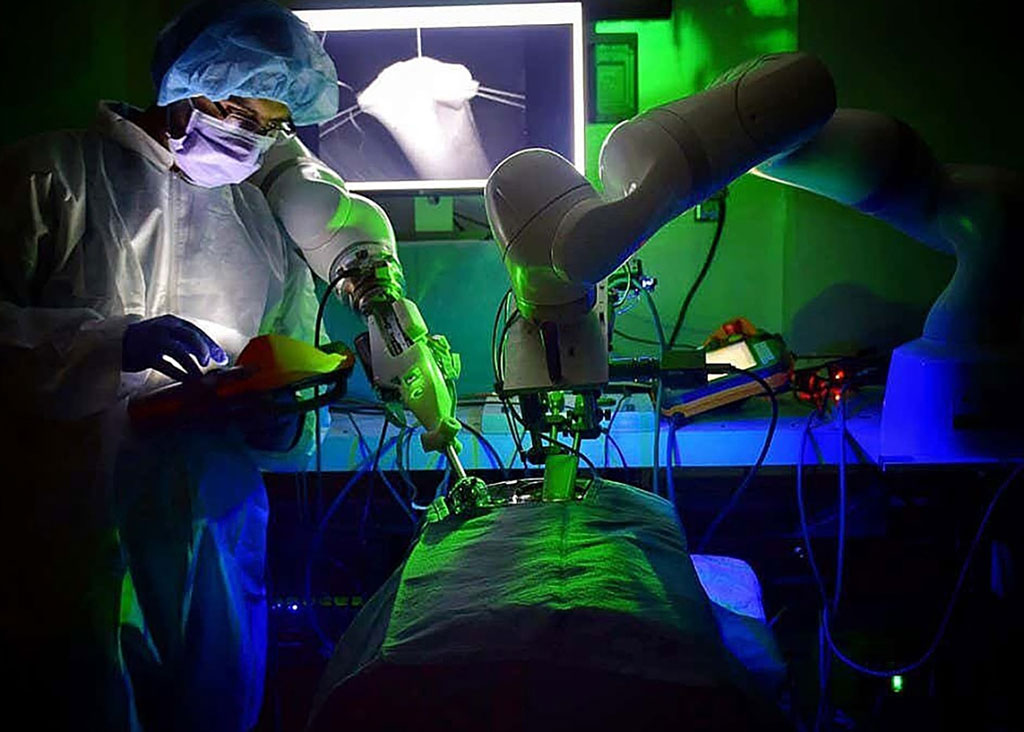 The concept of robot-assisted surgery is not new, and several systems have already been developed and are being used to treat human patients. Existing autonomous robotic systems have largely been used to assist in surgeries involving hard tissues, such as drilling into bone for hip or knee implants. But these systems haven’t been used for soft tissue surgeries, which pose unique challenges, like accounting for unpredictable tissue motions that occur when the patient breathes, or size limitations of the surgical tools. Now, researchers have developed an autonomous robot that can perform bowel surgery with minimal assistance from a surgeon. In addition, the robot outperformed expert surgeons when compared head-to-head in preclinical models.

The robot, called STAR (for Smart Tissue Autonomous Robot), has been developed by scientists at Johns Hopkins University (Baltimore, MD, USA). So far, the robot has been developed to perform intestinal anastomosis - where two pieces of small intestine are sewn together to form a single, continuous section - under the supervision and guidance of a surgeon. After the surgeon manually exposes the tissue edges, STAR takes images and develops a plan for suture placement based on the shape and thickness of the tissue. Once the human operator approves of the plan, STAR independently stitches the tissue together. If the tissue deforms or moves beyond a set threshold, STAR asks the surgeon if a new surgical plan should be created. This process is repeated until the robot completes the entire procedure.

To evaluate how well STAR performed compared with expert surgeons, the researchers used “phantom” bowel tissues as a model system. Synthetic small intestine was mounted to a linear stage that was programmed to move back and forth, which simulated breathing motions that would occur during surgery. Also during these experiments, the phantom tissue was randomly rotated and deformed, requiring STAR or the surgeon to pause, regroup, and complete the procedure. STAR performed the procedure on phantom tissues five times, and four surgeons performed the procedure two different ways - twice using traditional manual laparoscopy, and twice using a different robot-assisted system. When compared with the expert surgeons, STAR had fewer mistakes and was more consistent in suture spacing and depth. Additionally, when the researchers flowed viscous liquid through the resected phantom bowels, they found that the flow was the most laminar (smooth and streamlined) in the tissues reconstructed by STAR, indicating a higher quality anastomosis than those performed by the expert surgeons.

Finally, STAR’s performance was evaluated in a large animal model. Intestinal anastomosis was performed on five pigs; for four of the animals, the procedure was performed via STAR, and for the fifth animal, the procedure was performed via traditional manual laparoscopy. Similar to the phantom experiments, STAR made fewer mistakes compared with the expert surgeon. Additionally, when the researchers analyzed how well the resected bowels had healed seven days after surgery, there was no observable difference in wound healing between the two different surgical methods. Their findings demonstrate the potential for autonomous surgical robotics to democratize surgical care - which could lead to more predictable and consistent patient outcomes.

“Our results indicate that STAR is more consistent and accurate than expert surgeons when performing suturing tasks,” said Axel Krieger, Ph.D., at Johns Hopkins University who developed the autonomous robot. “While many may feel hesitant about having a machine perform a specialized task that is traditionally performed by a human, robotic systems have the potential to improve patient outcomes in medical settings. Just like the public has embraced the gradual influx of cruise control, lane assist, and self-parking features in automobiles - which will eventually lead to self-driving cars - I think we will see a similar progression in the field of medical robotics.”