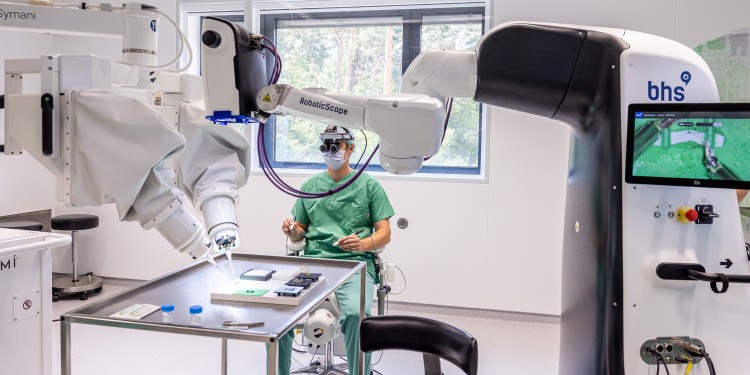 Image: The operations robot (right) is networked with a robotic microscope (left) (Photo courtesy of University of Münster)

In what is being seen as a great success for robotic microsurgery, a team of scientists has carried out the first completely robot-supported microsurgical operations on humans. The physicians used an innovative operating method in which a new type of operations robot, designed especially for microsurgery, is networked with a robotic microscope. This approach makes it possible for the operating surgeon to be completely taken out of the operating area.

Experts from the Centre for Musculoskeletal Medicine at the University of Münster (Münster, Germany) have been using this method for a good two months. So far, five operations have been successfully performed, with many more set to follow. The specialists use the method for example on patients with breast cancer who need complex breast reconstructions, or after accidents in which patients need tissue transplants. With the aid of the robot and the robotic microscope, the microsurgeons can for example join up again the finest anatomical structures such as blood vessels, nerves or lymphatic vessels, which often have a diameter of only 0.3 millimeters.

During the operation, the robot – the so-called Symani Surgical System – adopts human hand movements via an electromagnetic field and joysticks. The robot carries out the operating surgeon’s movements, reduced in size by up to 20 times, via tiny instruments and, in doing so, completely eliminates any shaking present in (human) hands. A robotic microscope is connected to the operation robot, and this microscope shows the area being operated on via a so-called 3D Augmented Reality Headset with two high-resolution monitors. This headset contains binoculars which are able to combine the real world with virtual information. In this way, the surgeon’s head movements can be recorded and transferred to the robot, making even complicated viewing angles possible on the area being operated on. In addition, the operating surgeon can access a variety of menus and perform functions with the robot without using his or her hands.

The new technology also has the advantage that operating surgeons can adopt a relaxed posture – whereas they otherwise have to perform operations in a strenuous posture over a period of several hours. During training with students and established microsurgeons, the physicians were able to demonstrate that, while using the robotic system, the learning curve, the handling of the instruments, and the ergonomics all demonstrated an improvement over conventional operating techniques. In the coming weeks and months, the physicians will be performing further operations and, in the process, collect data that they will be evaluating in scientific studies. Important issues to be addressed are, in particular, improvements to the quality of operations and to ergonomics.

“This new method for operations enables us to work with a much higher degree of delicacy and precision than is possible with conventional operating techniques,” said Dr. Maximilian Kückelhaus who led the team of physicians. “As a result, less tissue is destroyed and patients recover faster.”

“Our hope is that with this new method we can not only perform operations with a greater degree of precision and safety – but also, in the case of the tiniest structures, go beyond limits imposed by the human body. Not having to be at the operating table can also mean that one day the operating surgeon will no longer have to be physically present. An expert might be able to perform special operations at any one of several locations – without having to travel and be there in person,” added Maximilian Kückelhaus, looking into the future.