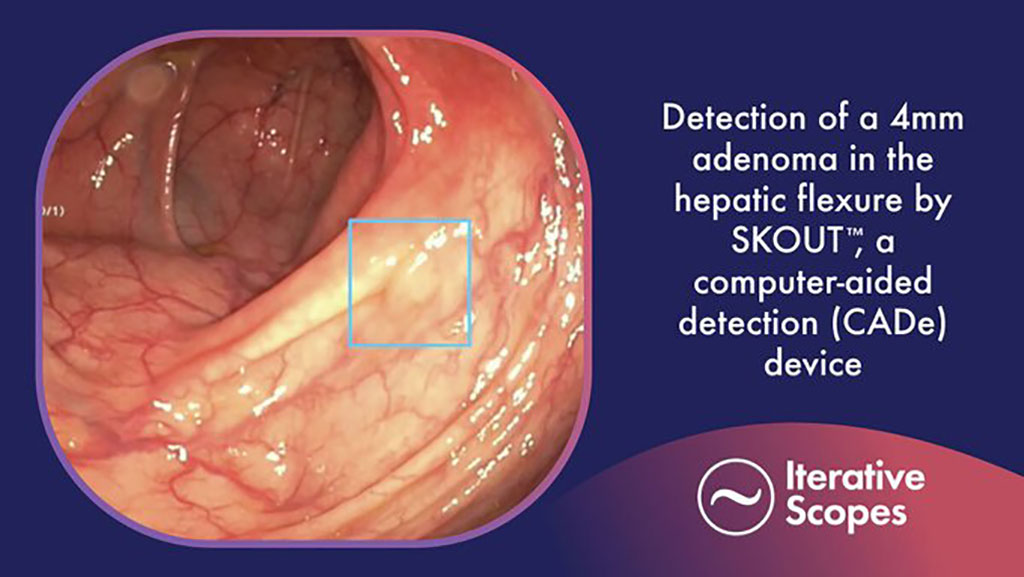 Colorectal cancer is the second leading cause of cancer-related deaths in the U.S. and Europe, due in part to the high volumes of adenomas – approximately 26% – that endoscopists miss when conducting a colonoscopy. Now, a real-time computer-aided polyp detection device that uses advanced computer vision technology to recognize suspicious tissue and provide real-time feedback to gastroenterologists could be a true game-changer for the field of gastroenterology.

The device name SKOUT has been developed by Iterative Scopes (Cambridge, MA, USA) and is indicated as a computer-aided detection tool to assist qualified and trained endoscopists in identifying potential colorectal polyps during colonoscopy examinations in adult patients undergoing colorectal cancer screening or surveillance. SKOUT’s intuitive user interface seamlessly integrates with existing clinical workflows and does not increase total procedure or withdrawal time. When a potential polyp is detected, the system calls attention to the polyp on the procedure monitor by drawing a blue bounding box around it and tracking the polyp as it moves on the screen. If a medical tool enters the frame, the bounding box automatically disappears to avoid obstructing the physician’s view during polyp removal.

SKOUT was evaluated in the largest U.S.-based multicenter clinical study for a computer aided polyp detection (CADe) device completed to date, which determined that SKOUT significantly improved overall adenoma detection in screening and surveillance colonoscopy compared to standard colonoscopy. In its registration trial, SKOUT was found to improve adenoma detection, as measured by adenomas per colonoscopy (APC). Furthermore, increased detection was not limited to diminutive polyps. Higher APC rates have been shown to lead to improved patient outcomes; a recent study showed that the incidence of colorectal cancer within three years of examination decreases with higher APC rates.

“Even among the best endoscopists, there is room for improvement in adenoma detection, which can impact patient outcomes,” said Sloane Allebes Phillips, VP of Clinical Operations at Iterative Scopes. “We are enthusiastic about the fact that even gastroenterologists with an already high baseline rate of adenoma detection demonstrated an improvement with SKOUT. Now that SKOUT is FDA-cleared, clinicians will be able to better detect adenomas with more efficiency, and ultimately change the standard of gastrointestinal care.”