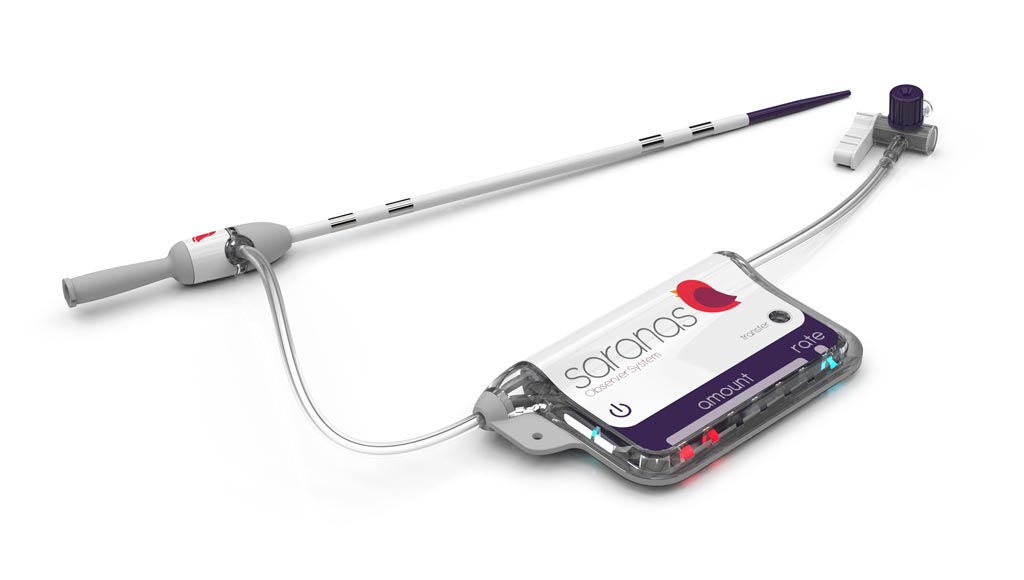 The Saranas (Houston, TX, USA) Early Bird Bleed Monitoring System includes a vascular access sheath with embedded bioimpedance sensors that are designed to detect and monitor bleeding from vessel injury, which may occur during endovascular procedures, such as a transcatheter aortic valve replacement (TAVR), large bore hemodynamic support device placement, or other complex cardiovascular interventions where the femoral artery or vein is used to obtain vascular access. If the blood vessel is punctured, blood begins to accumulate outside, causing a change in electrical impedance.

The system, which was designed and developed with the help of Cambridge Consultants (United Kingdom), can detect this change in real time and alert the physician; as there are no outward symptoms of such a puncture, the patient can bleed undetected. In an animal study to test the device’s effectiveness, the Early Bird was able to detect internal bleeds with 100% sensitivity and 100% specificity. Early Bird integrates with hardware currently used in the surgical suite, resulting in reduced complexity of the procedure and minimal staff training.

“Peri-procedural bleeding associated with endovascular procedures has a significant impact on patient safety and adds incremental costs to the healthcare system, with longer hospital stays and additional interventional treatment,” said Philippe Généreux, MD, chief medical officer of Saranas. “I firmly believe the Early Bird will help protect, and in some cases, save the lives of patients undergoing an endovascular procedure by allowing physicians to detect the onset of bleeding early and take appropriate steps to address the bleed before detrimental, irreversible, and life-threatening consequences occur.”

In the United States alone, over 4.7 million interventional cardiology procedures involving vascular access occur annually – complemented by an additional 13.5 million central venous and arterial lines placed each year. These figures are increasing steadily with the rise in the target age demographic and the invention of new procedures and devices employing vascular access. Bleeding complications presently occur in 7% of emergent and 4% of elective percutaneous coronary interventions.