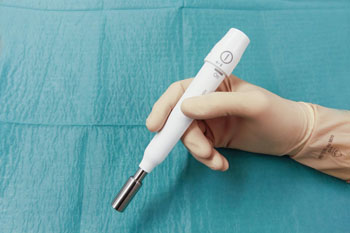 Developed by researchers at Ecole Polytechnique Fédérale de Lausanne (EPFL; Switzerland), the Gamma and Beta probes are 20 centimeters long each and weigh around 100 grams, resembling a large pen. While the Gamma probe is an upgrade to similar devices already used, the Beta probe is a completely new device that is able to detect extremely small specimens of cancerous tissue by searching for positrons emitted by a tracer substance, which attaches to the cancer cells. Since positrons can only travel through a millimeter of tissue, when detected they pinpoint the tumor cells.

“The probe has a little window at one end that picks up the gamma rays or positrons given off by the substance injected into the patient,” said Edoardo Charbon, director of the Advanced Quantum Architecture Lab (AQUA) at EPFL. “A scintillator converts the energy of the rays into photons, which are then detected by a highly sensitive sensor.”

The positron is the antimatter counterpart of the electron; it has an electric charge of +1 e, a spin of ½, and has the same mass as an electron. When a low-energy positron collides with a low-energy electron, annihilation occurs, resulting in the production of two or more gamma ray photons. Positrons may be generated by positron emission radioactive decay (through weak interactions), or by pair production from a sufficiently energetic photon, which is interacting with an atom in a material.