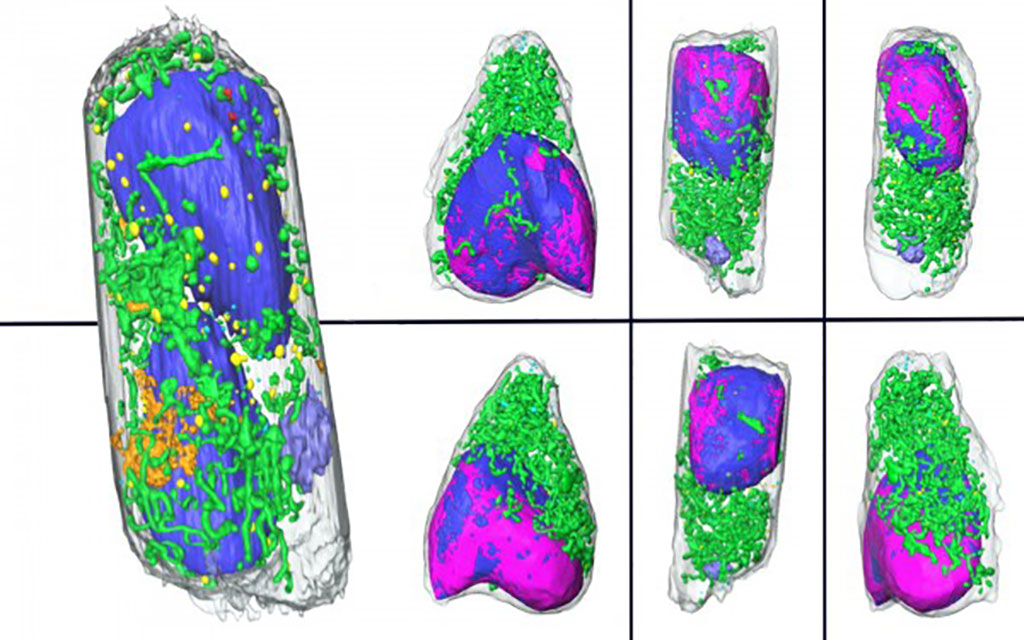 An extremely fast new 3D imaging method can show how cells respond to SARS-CoV-2 infection and to possible treatments.

Researchers from Berkeley Lab (Berkeley, CA, USA) and Heidelberg University (Heidelberg, Germany) have cranked up the speed of imaging infected cells using soft X-ray tomography (SXT), a microscopic imaging technique that can generate incredibly detailed, three-dimensional scans. Their approach takes mere minutes to gather data that would require weeks of prep and analysis with other methods, giving scientists an easy way to quickly examine how our cells’ internal machinery responds to SARS-CoV-2, or other pathogens, as well as how the cells respond to drugs designed to treat the infection.

SXT was developed at Berkeley Lab in the early 2000s to fill in the gaps left by other cellular imaging techniques and is currently offered to investigators worldwide even as the researchers continue to refine the approach. As part of a study, the researchers performed SXT on human lung cell samples. The team carefully infected the cells with SARS-CoV-2 and then chemically fixed them with aldehyde-based compounds – a process that kills cells and preserves them, immobilized, in their last living state (and also inactivates any remaining viral particles) – at six and 24 hours post-infection.

The entire team was jubilant when the resulting 3D images had the same level of exquisite detail and clarity that SXT is known for, despite the chemical fixation done to the cells. The takeaway is that their approach will allow many labs to safely image infected cells without the inherent risks – and corresponding required safety protocols – of working with live infected cells. Upon conducting the tomography sessions and image analysis, the researchers were pleasantly surprised to see how SXT captured changes to different organelles within the lung cells at very high resolution after very little time spent on sample preparation and without use of stains or labeling. These additional steps are often needed to generate cell maps wherein the different internal components are easily distinguishable.

Now that they’ve demonstrated the potential of using whole-cell SXT to safely image virus-infected cells, the researchers believe that their findings will help the global scientific community study COVID-19 and potentially other diseases. The team is already putting the technique to good use and has begun using whole-cell SXT to examine how human cells respond to several experimental COVID-19-treating drugs. They hope the rapid turnaround for results will help expedite the drug development process, getting additional effective treatments on the market sooner. They also plan to use the technology to understand the progress of infections caused by other viral agents.

“Prior to our imaging technique, if one wanted to know what was going on inside a cell, and to learn what changes had occurred upon an infection, they'd have to go through the process of fixing, slicing, and staining the cells in order to analyze them by electron microscopy. With all the steps involved, it would take weeks to get the answer. We can do it in a day,” said project co-lead Carolyn Larabell, a Berkeley Lab faculty scientist in the Biosciences Area. “So, it really speeds up the process of examining cells, the consequences to infection, and the consequences of treating a patient with a drug that may or may not cure or prevent the disease.”