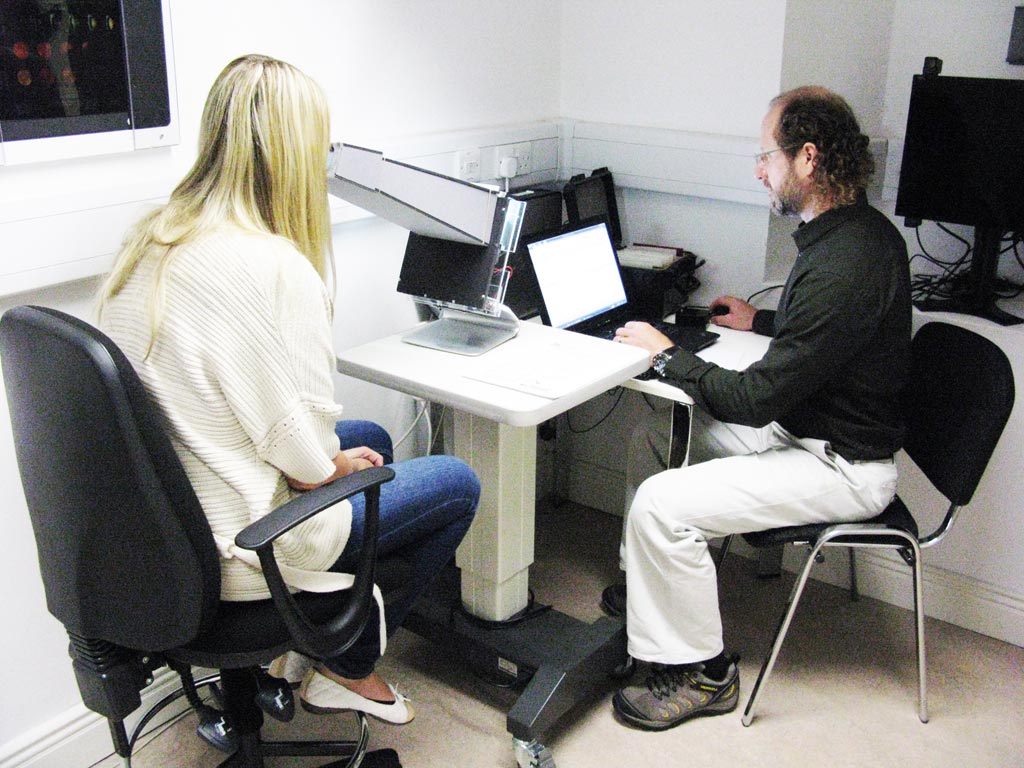 Developed at the University of Bristol (United Kingdom), the device is based on an entoptic phenomenon that allows certain people to perceive polarization of light as a yellow horizontal bar or bow-tie shape visible in the center of the visual field, typically occupying roughly 3–5 degrees of vision. The direction of light polarization is perpendicular to the yellow bar; fainter bluish or purplish areas may be visible. Dr. Shelby Temple, PhD, of the School of Biological Sciences first encountered the phenomenon while studying the ability of octopuses, cuttlefish, and coral reef fish to see polarized light.

“What I was seeing was an effect known as Haidinger’s brushes, which is an effect that happens within the eye when people perceive polarized light. A person’s ability to see this phenomenon is linked to an aspect of eye health and can be an early indicator of disease,” explained Dr. Temple. “It became clear that the tools I had developed for fish could become the foundation for a novel ophthalmic device that could rapidly screen people for susceptibility to AMD.”

“If we can catch this early, people can make simple changes, like eating more brightly colored fruits and vegetables, quitting smoking and wearing protective eyewear, to help reduce the chances of going blind later in life,” added Dr. Temple, who is a co-founder of Azul Optics, a company created to commercialize the technology. Dr. Shelby Temple recently received the UK Biotechnology and Biological Sciences Research Council award of Innovator of the Year 2017 for his research.

“The BBSRC Innovator of the Year competition recognizes and rewards BBSRC-funded scientists that have identified and taken an active part in realizing the impact from their research,” said Karen Lewis, interim executive director at the BBSRC. “Dr. Temple’s technology has the potential to make a significant difference to people’s lives. The journey that Dr. Temple is taking to realize this opportunity from very fundamental research epitomizes the spirit of the competition. As well as being named Innovator of the Year 2017, Dr. Temple also received the award in the Commercial Impact category.”

AMD is a major cause of blindness and visual impairment in older adults in the center of the visual field (the macula) due to damage to the retina. Occurring in both dry and wet forms, AMD makes it difficult or impossible to read or recognize faces, although enough peripheral vision remains to allow other activities of daily life. In the dry (nonexudative) form, cellular debris called drusen accumulates between the retina and the choroid, and the retina can become detached. In the more severe wet (exudative) form, blood vessels grow from the choroid behind the retina, and the retina can also become detached.