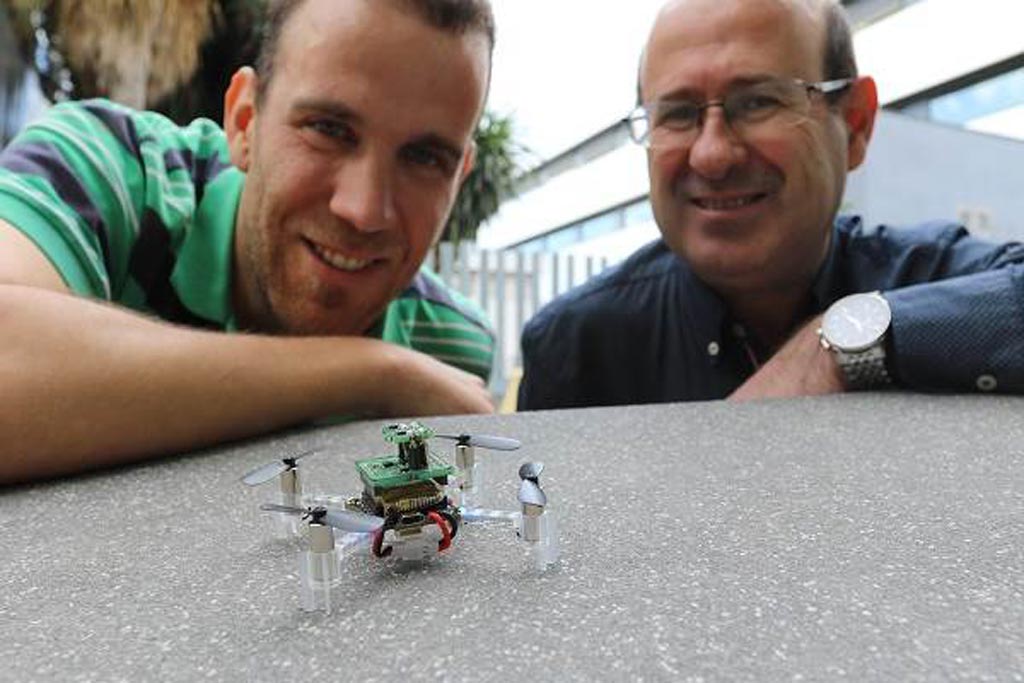 Image: Javier Burgués (L) and Santiago Marco (R), of UB and IBEC, and the nanodrone (Photo courtesy of IBEC).
A new study describes an innovative smelling nano aerial vehicle (SNAV) that can detect dangerous compounds in buildings that have collapsed due to earthquakes or explosions.

Developed at the University of Barcelona (UB, Spain), the Institute for Bioengineering of Catalonia (IBEC; Barcelona, Spain) and Örebro University (ORU; Sweden), the SNAV nanodrone weighs just thirty-five grams, including two nanometric metal oxide semiconductor (MOX) gas sensors that can respond to carbon monoxide (CO), methane (CH4), and other organic volatile compounds such as ethanol, acetone and benzene, with a detection threshold on the order of one part per million in volume (PPMV), according to the gas and the sensor used.

Due to its small form-factor, the SNAV is not hazardous to humans, thus enabling its use both in public areas and inside buildings, autonomously carrying out missions in hazardous environments inaccessible to terrestrial robots and bigger drones. To guide the SNAV, six radiofrequency transceivers, located in known positions, are used, which together with a transceiver in the nanodrone itself allows operators to fly it to a desired position using the built-in accelometers and gyroscopes.

As a result, the SNAV is able to work in interior spaces, crossing holes and cracks, as well as in large areas--about 160 square meters--if the chemical emission source is hidden in areas which are hard to access, such as false ceilings, air duct systems, etc. In experiments conducted at ORU, the researchers were able to build a 3D map of the gas distribution and identify the most likely source location in less than three minutes, with a 1.38-2.05 meter accuracy. The study was published in the March 2019 issue of Sensors.

“Terrestrial robots used to focus the searching on the field of chemical signaling-based localization. Today, the option of using nanodrones broadens the ability and quickness of the robots to move within an interior space and overcome obstacles such as stairs,” said senior author Santiago Marco, PhD, head of the intelligent signaling for sensor systems in bioengineering research group at UB-IBEC. “Another line we want to work on is the merge of data from multiple gas sensors to increase selectivity towards certain compounds of interest.”

Institute for Bioengineering of Catalonia