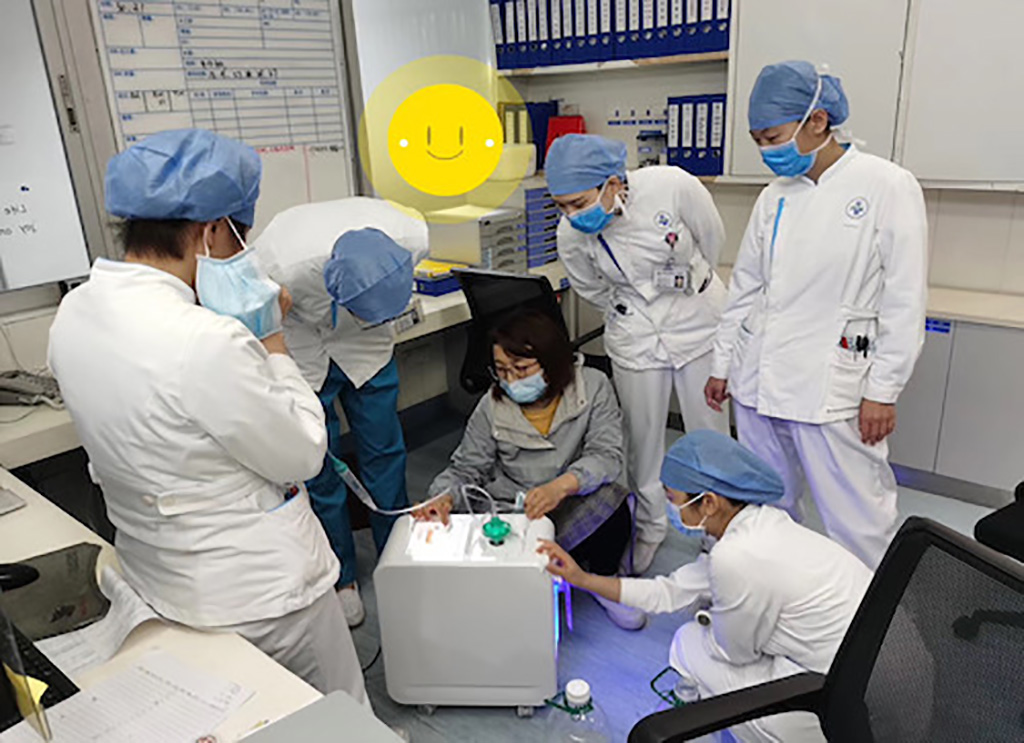 Developed by Asclepius Meditec (Shanghai, China), the AMS-H-03 medical hydrogen/oxygen generator with nebulizer uses electrolysis of common mineral water to separate it into its constituent gases. The system can atomize up to 30mL/hour of water to generate 2000-3000 ml/minute of gases, with the level and pressure of the hydrogen controlled by onboard microchips. Other features include easy-to-use touchpad controls, a built-in app and both Wi-Fi and Bluetooth communication, advanced anti-explosion technology, and a tailor-made patient mask. Users’ records can be stored in the system.

The hydrogen generated can then be used to replace nitrogen in order to facilitate transportation of oxygen into the alveoli of the lungs. Hydrogen's powerful anti-inflammatory effect can also help reduce the acute inflammation caused by the SARS–CoV-2 virus and the concomitant multi-organ dysfunction. An analysis of 259 COVID-19 hospital patients treated with the hydrogen oxygen nebulizers in China showed that symptoms improved significantly in terms of fever, cough, sputum, shortness of breath, chest tightness, chest pain, and peripheral blood oxygen saturation (SpO2).

“The data collected by the team from three hospitals in Wuhan and Guangzhou showed that the hydrogen oxygen nebulizers have certain effects on alleviating hypoxic symptoms in critically ill cases, and the cost is relatively low,” said pulmonologist Zhong Nanshan, MD, who earned international fame for managing the 2003 SARS outbreak, and served as crisis manager in Wuhan. “Currently, nearly 1,000 cases have been treated with hydrogen oxygen nebulizers.”

Hydrogen, the smallest molecule known in nature, is a stable molecule and does not react with other therapeutic medical gases at room temperature, thus, it may be administered as a combined gas with other gases or inhaled anesthesia agents. Inhaled hydrogen gas has been safely utilized for treatment of decompression syndrome in divers, suggesting that hydrogen can be safely administered to patients.