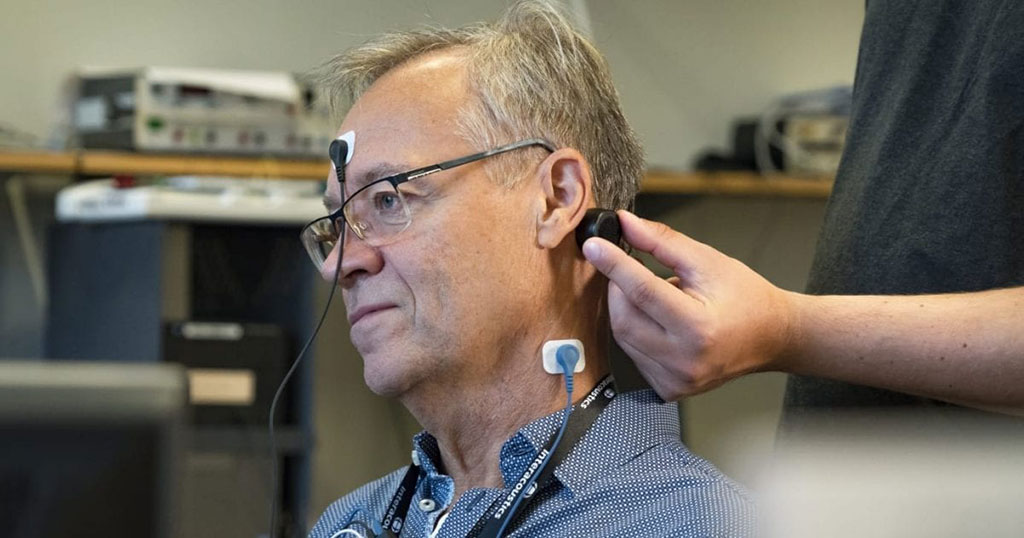 Developed at Chalmers University of Technology (Göteborg, Sweden), audio companies Ortofon (Lolland, Denmark) and Interacoustics, and in collaboration with Sahlgrenska Academy (SA; Göteborg, Sweden), the B250 vibration device has been optimized to trigger a VEMP test, which evokes a muscle reflex contraction in the neck and eye muscles. Vestibular function can be assessed by averaging muscle activity response to each sound. The vibrating device is compatible with standardized equipment for balance diagnostics.

The biggest advantage of the B250 is that it triggers the muscle reflex at very low frequencies and volumes (maximum sound level of 75 decibels), and much lower than in current methods, which use very high sound levels, and may in fact cause permanent hearing damage. Benefits also include safer testing for children, and that patients with impaired hearing function due to chronic ear infections or congenital malformations in the ear canal and middle ear can be diagnosed for the origin of their dizziness.

“We have developed a new type of vibrating device that is placed behind the ear of the patient during the test,” said lead developer Professor Bo Håkansson, PhD, of the biomedical signals and systems unit at Chalmers. “The vibrating device is small and compact in size, and optimized to provide an adequate sound level for triggering the reflex at frequencies as low as 250 Hz, which we have found to be optimal for VEMP stimulation. Previously, no vibrating device has been available that was directly adapted for this type of test of the balance system.”

“Thanks to this bone conduction technology, the sound levels which patients are exposed to can be minimized. The previous test was like a machine gun going off next to the ear – with this method it will be much more comfortable,” said Karl-Johan Fredén Jansson, PhD, also of Chalmers. “The test can be performed at 40 decibels lower than today's method using air conducted sounds through headphones. This eliminates any risk that the test itself could cause hearing damage.”

In a traditional vestibular investigation, two variants of VEMP tests are used today: air transmitted sound through headphones or bone conducted sounds via a vibrating device attached to the head. When air transmitted sounds are used, high sound levels are required, which is uncomfortable to the patient and there is a risk of hearing damage. For bone conducted sound, the sound levels are lower, but the equipment currently available on the market is large and cumbersome, and therefore difficult to use.