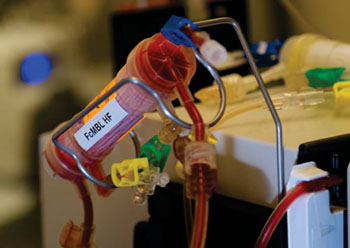 Developed by researchers at the Wyss Institute for Biologically Inspired Engineering (Boston, MA, USA), the sepsis device uses an innovative blood-cleansing approach that harnesses a proprietary pathogen-capturing agent called antibody Fc Mannose Binding Lectin (FcMBL), which binds all types of live and dead infectious microbes, including bacteria, fungi, viruses, and the endotoxins they release. As a universal device, it can be put into use quickly, even without identifying the infectious agent involved.

The concept is similar to that of a dialysis machine; infected blood is drawn from a vein through to the device, where FcMBL-coated magnetic beads are added to the blood. The pathogen-loaded beads are extracted by magnets within the device before the cleansed blood is returned to the body. The system uses commercial polysulfone or polyethersulfone cartridges coated with FcMBL. In animal studies the pathogen-extracting device reduced the number of E. coli, Staphylococcus aureus, and endotoxins circulating in the bloodstream by more than 99%. The device is described in the October 2015 of Biomaterials.

“The most effective strategy is to treat with the best antibiotics you can muster, while also removing the toxins and remaining pathogens from the patient's blood as quickly as possible,” said Donald Ingber, MD, PhD, founding director of the Wyss Institute. “Our goal is to see this move out of the lab and into hospitals as well as onto the battlefield, where it can save lives within years rather than decades.”

“If all goes well, physicians will someday be able to use the device in tandem with standard antibiotic treatments to deliver a one-two punch to pathogens, synergistically killing and cleansing all live and dead invaders from the bloodstream,” said lead author postdoctoral fellow Tohid Fatanat Didar, PhD. “Using the device, alone or alongside antibiotics, we can quickly bring blood back to normal conditions, curtailing an inflammatory response rather than exacerbating it.”

FcMBL is a genetically engineered blood protein inspired by a naturally-occurring human molecule called Mannose Binding Lectin (MBL), which is found in the innate immune system and binds to toxic invaders, marking them for capture by immune cells in the spleen.