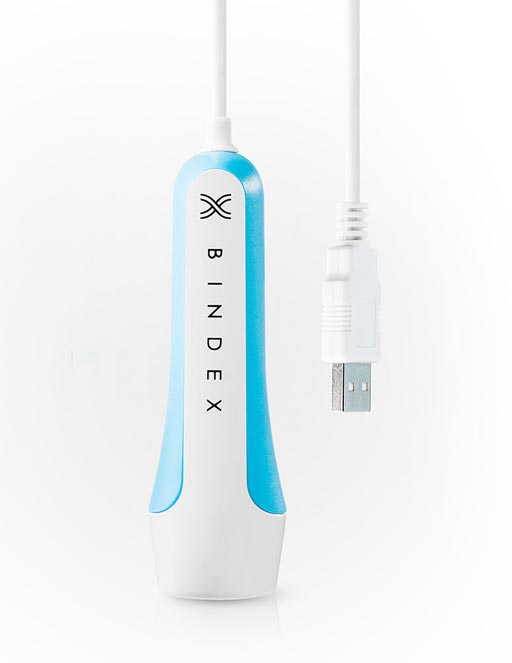 The Bindex is a pocket-sized tool for osteoporosis screening and diagnostics that provides bone density measurements comparable to those of standard axial dual-energy X-ray absorptiometry (DXA). It works by measuring the cortical thickness of the tibia; the results, when combined with other patient data, are used to estimate the hip region’s bone mineral density, a parameter usually received via DXA devices used in hospitals. The Bindex can replace nearly 70% of DXA scans for patients under osteoporosis suspicion, with only 30% of patients requiring a subsequent full DXA scan.

The device measures cortical bone thickness in just 30 seconds, providing immediate warning signs of osteoporosis, and allowing medical decisions to be made without delay. Once the measurement has been made, the Bindex is connected to a laptop or desktop computer via USB for graphical display of the results. The Bindex device is a product of Bone Index, and has been approved by the U.S. Food and Drug Administration (FDA).

“Undiagnosed osteoporosis is a worldwide challenge; in the US alone osteoporosis is responsible for two million broken bones every year, costing over 19 billion dollars,” said Ossi Riekkinen, PhD, CEO of Bone Index. “One of the biggest challenges is the limited availability of osteoporosis diagnostics, since bone density scans are mostly performed in hospitals with large DXA X-ray machines that entail high costs. This is why Bindex is a game-changer.”

Osteoporosis is defined as a bone density of 2.5 standard deviations below that of a young adult, as measured by DXA. It is the most common reason for a broken bone among the elderly, and may be due to a lower than normal peak bone mass and a greater than normal bone loss. It is more common in women than men, with 2-8% of males and 9-38% of females affected after menopause, usually due to lower levels of estrogen.