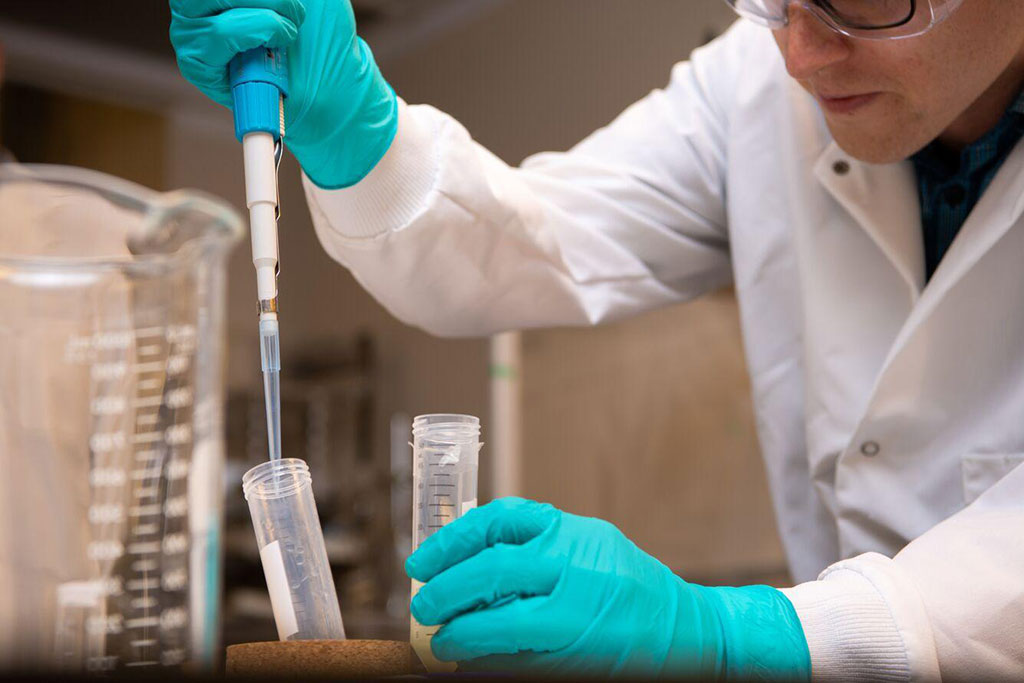 Image: Coronavirus-detecting micelles being transferred from one test tube to another (Photo courtesy of PNNL)

Scientists have shown that they can detect SARS-CoV-2, the virus that causes COVID-19, in the air by using a nanotechnology-packed bubble that spills its chemical contents like a broken piñata when encountering the virus. Such a detector could be positioned on a wall or ceiling, or in an air duct, where there’s constant air movement, to alert occupants immediately when even a trace level of the virus is present. The heart of the nanotechnology is a micelle, a molecular structure composed of oils, fats and sometimes water with inner space that can be filled with air or another substance. Micelles are often used to deliver anticancer drugs in the body and are a staple in soaps and detergents. Almost everyone has encountered a micelle in the form of soap bubbles.

A team of scientists at the Pacific Northwest National Laboratory (PNNL, Richland, WA, USA) created a new kind of micelle, one that is stamped on the surface with copies of an imprinted particle for SARS-CoV-2. The team filled micelles with a salt capable of creating an electronic signal but that is quiescent when packed inside a micelle. When a viral particle interacts with one of the imprinted receptors on the surface, the micelle pops open, spilling the salt and sending out an electronic signal instantly. The system acts like a signal magnifier, translating the presence of one viral particle into 10 billion molecules that together create a detectable signal. The developers say that the detector has advantages over today’s technologies; it produces a signal faster, requires a much lower level of viral particles, or produces fewer errors.

PNNL’s micelle technology is the product of an arduous chain of 279 separate chemical steps developed by the team. The researchers estimate that the technology can pluck one viral particle out of billions of other particles. The detector is so sensitive that the team had a challenging time identifying the lower limit. The team used both inactivated SARS-CoV-2 viral particles and the virus’s spike protein in its tests. While the technology detects the virus within a millisecond, the device takes an additional minute to run quality-control software to confirm the signal and prevent false alarms.

“There is a need for this kind of low-cost detection system,” said PNNL scientist Lance Hubbard, a nanotechnology specialist and an author of the paper. “Perhaps it could be implemented in schools, or in hospitals or emergency rooms before patients have been fully assessed - anywhere you need to know immediately that the virus is present.”