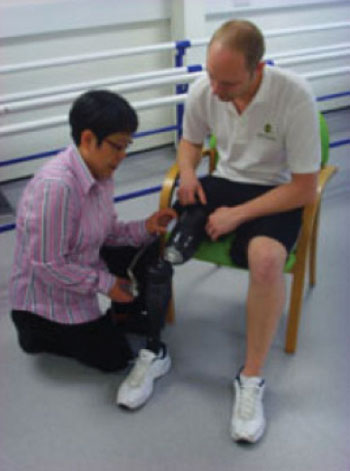 Image: Dr. Liudi Jiang fitting the liner to a prosthetic limb (Photo courtesy of the University of Southampton).
A prototype prosthetic intelligent liner with integrated pressure sensors could help relieve the pain and discomfort experienced by amputees due to poorly fitting replacement lower limbs.

Developed by researchers at the University of Southampton (United Kingdom), the novel sensors measure the compression and stretching forces at the interface between a patient's stump and the socket of their prosthesis. When coupled with the liner, the sensors allow clinicians to quickly and accurately assess and optimize socket fit at the outset. A wireless interface will also monitor changes to socket fit over time, alerting patients of the need to adjust their socket or activities to prevent ulcers from forming.

According to the researchers, the relatively practical and potentially low-cost solution could substantially reduce amputees' follow-up visits to rehabilitation centers, giving them a better quality of life, while at the same time reducing healthcare costs. In future, the researchers believe that the technology could form the basis for other intelligent materials, such as shoe insoles to prevent diabetic foot ulcers, or mattresses and wheelchairs that protect against pressure sores in immobile or elderly patients.

“Socket fit is the single biggest factor determining whether prosthesis will be successful for a patient. If we had a simple way to accurately measure the load at the socket-stump interface and determine the best possible fit for that limb, it would completely transform the socket fit experience for amputees,” said Liudi Jiang, PhD, a member of the interdisciplinary team that invented the liner. “We're hoping that the development of the intelligent liner will be the first step leading to the 'holy grail' in prosthetics - a fully automatic, self-adjusting smart socket interface for amputees.”

“This is a tremendously exciting project which has the potential to transform socket technology as a whole in lower limb prosthetics,” said David Moser, PhD, head of research at Chas A Blatchford & Sons (Basingstoke, United Kingdom), which are partnering with the university to develop the sensor into a range of thin prosthetic liners to fit sockets of any shape and size. “We anticipate that from the development of this technology we will reach a new level of understanding and uncover the as yet unclear 'dynamic' qualities of limb loading and socket fit. This step is crucial for the development of the next generation of socket technology products and future artificial limb controls.”

Pain, discomfort, and ulceration are frequently experienced at the socket interface due to poor fit. This stems from the excessive build-up of pressure within the limb socket, causing high loads on the stump. Synthetic liners, worn like a sock over the stump, provide some cushioning against the hard socket, but at present there is no convenient way to accurately measure the critical loads at this interface.