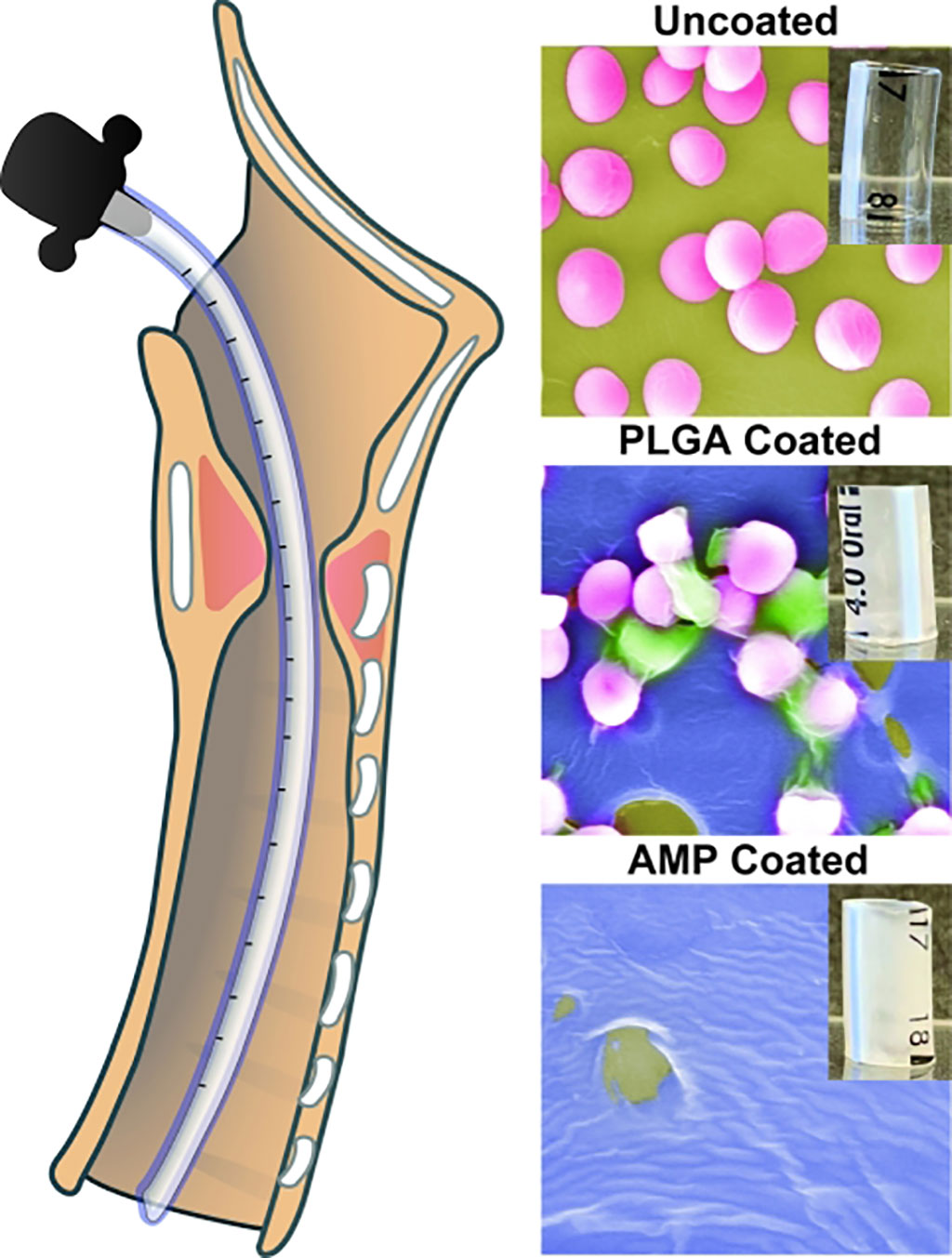 Developed at The Children's Hospital of Philadelphia (CHOP; PA, USA), the drug-eluting endotracheal (ET) coating consists of a water-in-oil emulsion of Lasioglossin-III (Lasio) in a base of poly(d,l-lactide-co-glycolide) (PLGA). Antibacterial activity was tested against Staphylococcus epidermidis, Streptococcus pneumoniae, and pooled human microbiome samples by placing ET tubes coated with Lasio/PLGA and appropriate controls in 48 well plates with diluted bacteria. Peptide release was quantified over two weeks via fluorometric peptide assays.

Biocompatibility was tested against laryngotracheal fibroblasts and lung epithelial cells, and bacterial inhibition and tube adhesion were tested by measuring optical density and colony formation after tube culture, respectively. The results revealed a prolonged, linear release over one week, the typical timeframe before the ET tube is changed. Significant antibacterial activity was evidenced during the study period, as well as prevention of bacterial adherence to the tube. No cytotoxicity to fibroblasts or lung epithelial cells was found. The study was published on July 28, 2021, in The Laryngoscope.

“We have created a novel device to modulate the upper-airway microbiome, which could be used to prevent bacterial infections during intubation and help prevent subglottic stenosis and other airway diseases,” said senior author Riccardo Gottardi, PhD, assistant professor of pediatrics and head of the bioengineering and biomaterials lab at CHOP. “Not only does this technology work predictably and continuously over the normal duration of chronically intubated patients, but it is also fast and easy to produce and could easily be modulated to target any bacteria of interest.”

AMPs, of which over 1,700 have been identified so fare, are potent, broad spectrum therapeutic agents that have been shown to kill both Gram positive and gram negative bacteria, enveloped viruses, fungi, and even some cancerous cells. Unlike antibiotic drugs, AMPs appears to destabilize biological membranes, form transmembrane channels, enhance immunity by altering host gene expression, induce chemokine production, promote wound healing, and modulate the responses of dendritic cells and cells of the adaptive immune response.

The Children's Hospital of Philadelphia

Researchers plan to test artificial intelligence (AI) medical imaging to determine which rectal cancer patients need surgery - or can avoid it. Building on its successes in applying AI to medical imaging... Read more

A novel device could lead to increased longevity and durability of saphenous vein grafts (SVG) during coronary artery bypass graft (CABG) surgery, according to a new study. The venous external support... Read more

IHF to Launch Geneva Centre of Healthcare Leadership for Sustainability

The International Hospital Federation (IHF; Geneva, Switzerland) is preparing to launch the Geneva Centre of Healthcare Leadership for Sustainability (the Centre) in 2022 in response to the need for hospitals... Read more