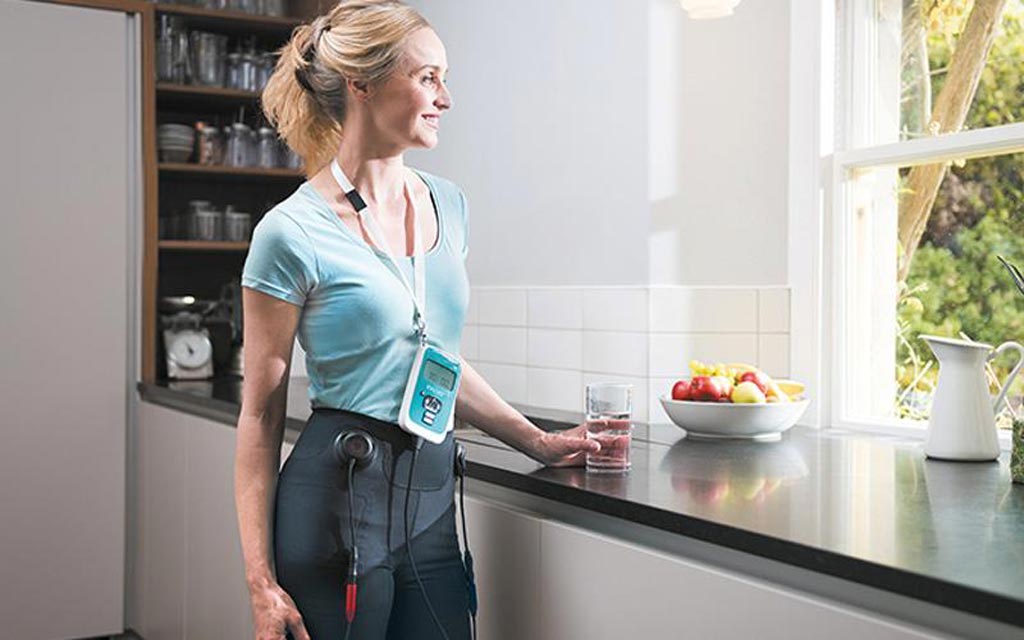 The Atlantic Therapeutics (Galway, Ireland) Innovo system is a non-invasive transcutaneous muscle exerciser, resembling a pair of cycling shorts, which uses electrical stimulation to deliver 180 precise, complete contractions to the pelvic floor muscles. During each 30-minute exercise session, the system strengthens and re-educates the network of muscles that control bladder function. A hand-held controller connected to the shorts allows users to increase the intensity of the stimulations, and a smartphone app is also available.

Innovo may be prescribed as a front-line therapy to those suffering SUI, or as a second line therapy to those that have previously failed physical therapy (in the form of supervised or unsupervised pelvic floor exercises, also known as Kegel exercises). A pivotal randomized controlled trial held in the United States demonstrated the efficacy and safety of the device, with 87.2% of patients treated dry or mild after a 12-week treatment period, and 93% experiencing improvement in just four weeks. An earlier sham-controlled trial in Europe also demonstrated significant improvement across all study endpoints.

“For the first time, physicians in the United States can offer their patients a safe, clinically effective, noninvasive home-based treatment,” said Steve Atkinson, CEO of Atlantic Therapeutics. “Innovo therapy is a compelling treatment option for all those women who today simply suffer in silence from stress urinary incontinence.”

“Innovo offers a new frontline therapeutic option for the millions of American women living with stress urinary incontinence, and in a significant group could delay or prevent the need for higher risk surgery or medical intervention,” said Elizabeth LaGro, vice president of The Simon Foundation for Continence (Wilmette, IL, USA).

SUI is the loss of bladder control or involuntary loss of urine when coughing, laughing, sneezing, or during heavy lifting, or simply getting up from a chair. SUI is the most common type of incontinence suffered by women, especially older women and women who have given birth. SUI also affects men, especially following prostate surgery. Other causes include weak pelvic muscles or a weak sphincter muscle; chronic coughing, smoking and obesity may also lead to SUI.