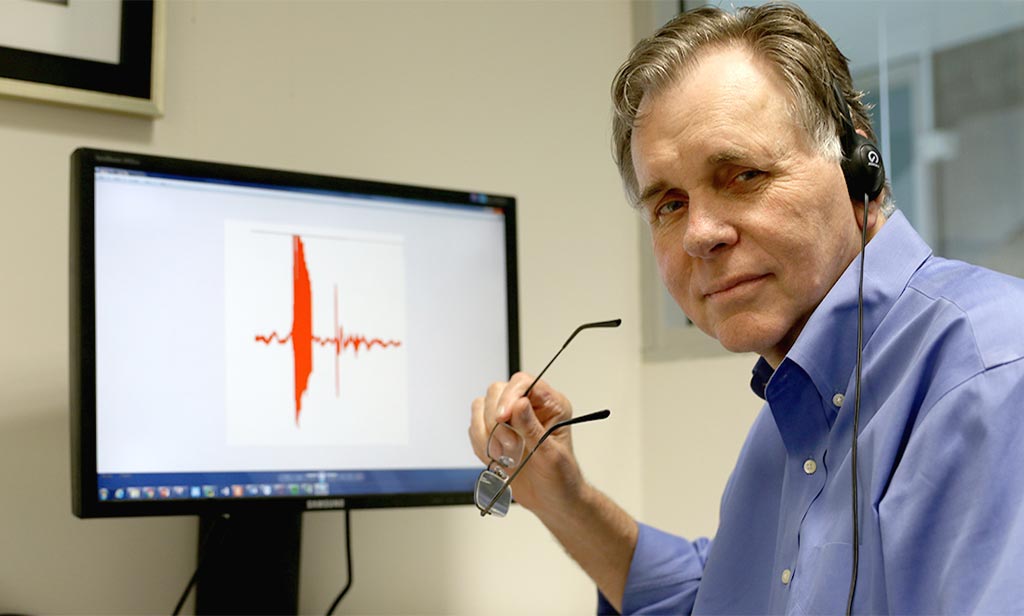 Image: Professor Barry Marshall listening to a gut recording (Photo courtesy of Scitech.org.au).
A novel acoustic belt offers a new way to diagnose irritable bowel syndrome (IBS) by listening to the patient's gut, according to a new study.

Developed at the University of Western Australia (UWA; Crawley, Australia), the basic prototype belt uses artificial intelligence (AI) machine learning techniques to identify complex features and patterns of sounds collected from within the abdomen. To develop the algorithm, the researchers first recruited 31 participants with a clinical diagnosis of IBS and another 37 volunteers with healthy digestive systems. Study members wore the belt and their bowel sounds were recorded for two hours post-fasting, and then for 40 minutes after a standardized meal.

The recordings were then used to build an IBS acoustic index model, using a statistical method called ‘leave one out cross-validation’, which yielded 90% sensitivity and 92% specificity for IBS diagnosis. They then conducted independent testing using a further 15 IBS and 15 healthy subjects, which showed that the acoustic index output of the belt predicted IBS with 87% sensitivity and 87% specificity, effectively differentiating between the two groups. The study was presented at the annual Digestive Disease Week, held during June 2018 in Washington (DC, USA).

“IBS is an extremely common disorder that is notoriously difficult to diagnose. We wanted to find a way to listen to the rumblings and grumblings of the gut to identify patterns that characterize chronic gut conditions, like IBS,” said senior author and study presenter Nobel laureate Professor Barry Marshall, MD, PhD, director of the UWA Marshall Centre. “We used acoustic sensing technology that was originally created to track the munching sounds of termites to see if we could detect problems in the human gut.”

“This study allowed us to achieve proof of concept. Once we further develop the belt and test it on more patients, this tool will be intended for use in primary care settings for the diagnosis of IBS,” added study co-author Josephine Muir, PhD, associate director of the UWA Marshall Centre. “The hope is that this new technology can offer a less- invasive way to diagnose this painful, and sometimes debilitating, condition.”

IBS is a functional bowel disorder characterized by chronic abdominal pain, discomfort, bloating, and alteration of bowel habits in the absence of any detectable organic cause; in some cases, the symptoms are relieved by bowel movements. Diarrhea or constipation may predominate, or they may alternate (classified as IBS-D, IBS-C or IBS-A, respectively). IBS may begin after an infection (post-infectious, IBS-PI), a stressful life event, or onset of maturity without any other medical indicators.