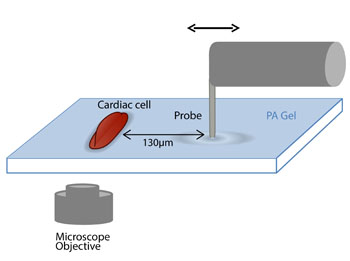 Image: Schematic representation of the experimental setup (Photo courtesy of Israel Institute of Technology).
A new study reveals that mechanical communication between cells plays an important role in cardiac physiology, and is essential for converting electrical pacing into synchronized beating.

Furthermore, the cardiac cell maintained the induced beating rate for more than one hour after mechanical stimulation was stopped, implying a long-range interaction of the stimulation that induces long-lasting alterations in interacting cells. Unlike electrical field stimulation, the long-term alterations provide a mechanism that has a more stable electromechanical delay. The mechanical coupling between cells could therefore ensure that the final outcome of action potential pacing is synchronized beating. The study was published on January 11, 2016, in Nature Physics.

“We have shown that cells are able to communicate with each other mechanically by responding to deformations created by their neighbors. Cell-cell communication is essential for growth, development and function,” said assistant professor Shelly Tzlil, PhD, of the faculty of mechanical engineering. “Impaired mechanical communication will lead to arrhythmias even when electrical conduction is working properly. The medical implication is that adding mechanical elements to electrical pacemakers will significantly improve their efficiency.”