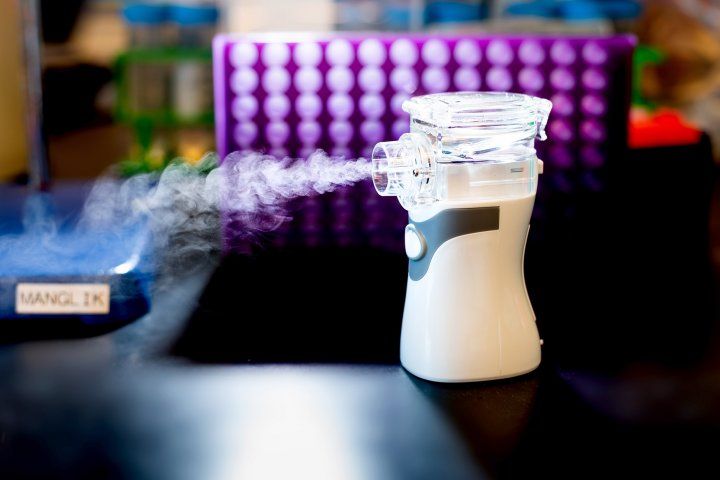 Illustration
Researchers have engineered a synthetic molecule which when self-administered in an aerosol formulation using a nasal spray or inhaler could provide powerful, reliable protection against SARS-CoV-2.

A team of researchers at UC San Francisco (San Francisco, CA, USA) has engineered a completely synthetic, production-ready molecule that straitjackets the crucial SARS-CoV-2 machinery that allows the virus to infect human cells. Experiments using live virus have shown that the molecule is among the most potent SARS-CoV-2 antivirals yet discovered. In an aerosol formulation they tested, dubbed AeroNabs by the researchers, these molecules could be self-administered with a nasal spray or inhaler. Used once a day, AeroNabs could provide powerful, reliable protection against SARS-CoV-2 until a vaccine becomes available.

Though engineered entirely in the lab, AeroNabs were inspired by nanobodies, antibody-like immune proteins that naturally occur in llamas, camels and related animals. Nanobodies are an order of magnitude smaller than human antibodies, making them easier to manipulate and modify in the lab. Their small size and relatively simple structure also makes them significantly more stable than the antibodies of other mammals. Plus, unlike human antibodies, nanobodies can be easily and inexpensively mass-produced.
SARS-CoV-2 relies on its so-called spike proteins to infect cells. Through a lock-and-key-like interaction between an ACE2 receptor and a spike RBD, the virus gains entry into the cell, where it then transforms its new host into a coronavirus manufacturer. The researchers believed that if they could find nanobodies that impede spike-ACE2 interactions, they could prevent the virus from infecting cells. After successive rounds of testing, during which they imposed increasingly stringent criteria to eliminate weak or ineffective candidates, the scientists ended up with 21 nanobodies that prevented a modified form of spike from interacting with ACE2.

Further experiments, including the use of cryo-electron microscopy to visualize the nanobody-spike interface, showed that the most potent nanobodies blocked spike-ACE2 interactions by strongly attaching themselves directly to the spike RBDs. These nanobodies function a bit like a sheath that covers the RBD “key” and prevents it from being inserted into an ACE2 “lock.” With these findings in hand, the researchers demonstrated that these nanobodies could prevent the real virus from infecting cells after testing the three most promising nanobodies against live SARS-CoV-2 that they found to be extraordinarily potent, preventing infection even at extremely low doses. The most potent of these nanobodies, however, not only acts as a sheath over RBDs, but also like a molecular mousetrap, clamping down on spike in its closed, inactive state, which adds an additional layer of protection against the spike–ACE2 interactions that lead to infection.

The scientists then engineered this double-action nanobody in a number of ways to make it into an even more potent antiviral. In one set of experiments, they mutated every one of the amino-acid building blocks of the nanobody that contacts spike to discover two specific changes that yielded a 500-fold increase in potency. In a separate set of experiments, they engineered a molecular chain that could link three nanobodies together. Each spike protein has three RBDs, any of which can attach to ACE2 to grant the virus entry into the cell. The linked triple nanobody devised by the researchers ensured that if one nanobody attaches itself to an RBD, the other two would attach to the remaining RBDs. They found that this triple nanobody is 200,000 times more potent than a single nanobody alone.

By linking three of the powerful mutated nanobodies together, the scientists constructed an ultrapotent three-part nanobody which formed the foundation for AeroNabs. In a final set of experiments, the researchers put the three-part nanobodies through a series of stress tests, subjecting them to high temperatures, turning them into a shelf-stable powder, and making an aerosol. Each of these processes is highly damaging to most proteins, but the scientists confirmed that, thanks to the inherent stability of nanobodies, there was no loss of antiviral potency in the aerosolized form, suggesting that AeroNabs are a potent SARS-CoV-2 antiviral that could be practical to administer via a shelf-stable inhaler or nasal spray.

The research team is now in active discussions with commercial partners to ramp up manufacturing and clinical testing of AeroNabs. If these tests are successful, the scientists aim to make AeroNabs widely available as an inexpensive, over-the-counter medication to prevent and treat COVID-19.

“Far more effective than wearable forms of personal protective equipment, we think of AeroNabs as a molecular form of PPE that could serve as an important stopgap until vaccines provide a more permanent solution to COVID-19,” said AeroNabs co-inventor Peter Walter, PhD, professor of biochemistry and biophysics at UCSF and a Howard Hughes Medical Institute Investigator. For those who cannot access or don’t respond to SARS-CoV-2 vaccines, Walter added, AeroNabs could be a more permanent line of defense against COVID-19.