Medical Errors Are a Major Cause of U.S Deaths 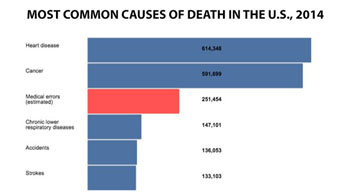 Image: A new study suggests that more than a quarter of a million Americans die each year from medical errors, ranking them as the third leading national cause of death (Photo courtesy of Johns Hopkins Medicine).
Researchers at Johns Hopkins Medicine (Baltimore, MD, USA) analyzed the scientific literature on medical error to identify its contribution to U.S. deaths in relation to causes listed by the U.S. Centers for Disease Control and Prevention (CDC, Atlanta, GA, USA), which are released to inform public awareness and determine national research priorities.

The list is created using death certificates filled out by physicians, funeral directors, medical examiners, and coroners. But a major limitation of the death certificate is that it relies on assigning an international classification of disease (ICD) code to the underlying cause of death, defined as the condition that led a person to seek treatment. As a result, even if a doctor does list medical errors on a death certificate, it is not included in the published totals, and thus causes of death not associated with an ICD code are not captured.

On the CDC's official 2014 list, heart disease and cancer take the lead, at about 600,000 lives. The researchers estimate medical errors take third place, at 250,000, followed by respiratory disease, which caused about 150,000 deaths. The researchers therefore called for adding a new question to death certificates, specifically asking if a preventable complication of care contributed to the cause of death. The study was published on May 3, 2016, in BMJ.

“You have this over appreciation and overestimate of things like cardiovascular disease, and a vast under-recognition of the place of medical care as the cause of death that informs all our national health priorities and our research grants,” said study co-author Professor Martin Makary, MD, MPH. “The inability to capture the full impact of medical errors results in a lack of public attention and a failure to invest in research.”

Medical error has been defined as an unintended act--either of omission or commission--or one that does not achieve its intended outcome, the failure of a planned action to be completed as intended, the use of a wrong plan to achieve an aim, or a deviation from the process of care that may or may not cause harm to the patient. Patient harm from medical error can occur at the individual or system level.