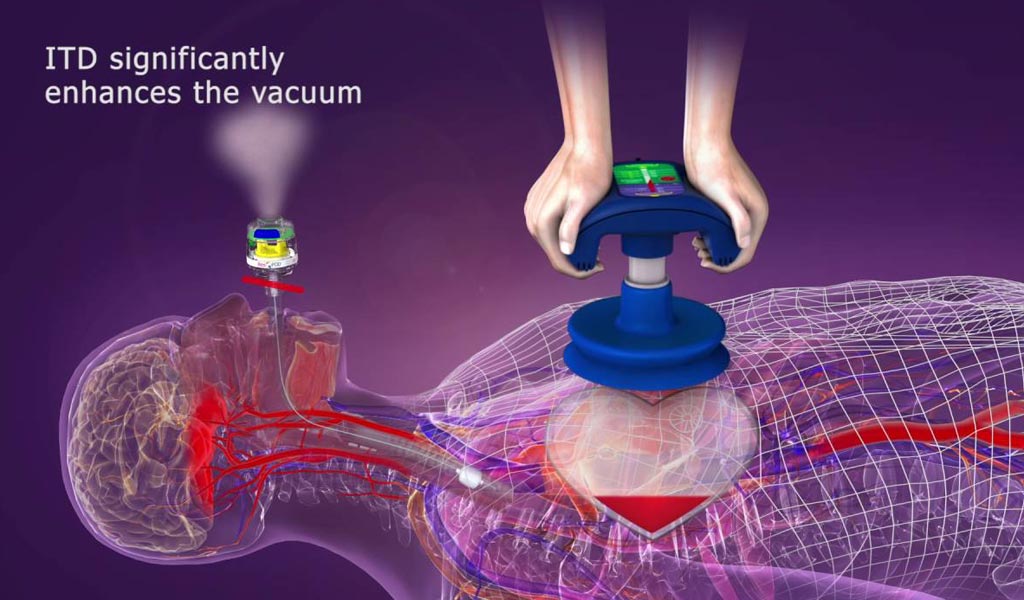 Image: The ResQCPR ITD device (Photo courtesy of ZOLL).
A new study concludes that cardiopulmonary resuscitation (CPR) outcomes are optimal when resuscitation is maintained for five minutes at about 107 compressions a minute.

Researchers at the University of Minnesota Medical School (UMN, Duluth, USA), Toho University (Tokyo, Japan), the University of Texas Southwestern Medical Center (UT Southwestern; Dallas, TX, USA), and other institutions conducted a cohort study involving 3,643 patients with out-of-hospital cardiac arrest (OHCA) to identify an ideal CPR compression and depth combination associated with the highest probability of functionally favorable survival. Responders used an impedance threshold device (ITD) that reduces the pressure in the chest and improves the return of venous blood to the heart.

The results showed that the identified optimal combination CPR for all patients was 107 compressions per minute at a depth of 4.7 cm. The optimal compression and depth combination remained the same regardless of age, sex, presenting cardiac rhythm, or CPR adjunct use, and was associated with much higher probabilities of survival (6%) when it was performed within 20% of the recommended value, as compared to 4.3% outside that range. The study was published on August 14, 2019, in JAMA Cardiology.

“The 6% survival among those patients compared with the 4% survival outside the combination zone would translate into several thousands of additional lives saved each year in the United States alone,” concluded corresponding author Paul Pepe, MD, MPH, of the UT department of emergency medicine, and colleagues. “Furthermore, if the ITD were used within the optimum four best cells for survivors, the 9.6% neurologic-intact survival that we detected would conservatively translate into at least 10,000 more lives saved annually.”

The ITD device used for the study is the ZOLL (Chelmsford, MA, USA) ResQCPR system, which provides perfusion on demand (POD) by regulating pressures in the thorax during a state of hypotension. This prevents unnecessary air from entering the chest during CPR; as the chest wall recoils, the vacuum in the thorax is greater. This enhanced vacuum pulls more blood back to the heart, doubling blood flow during CPR.