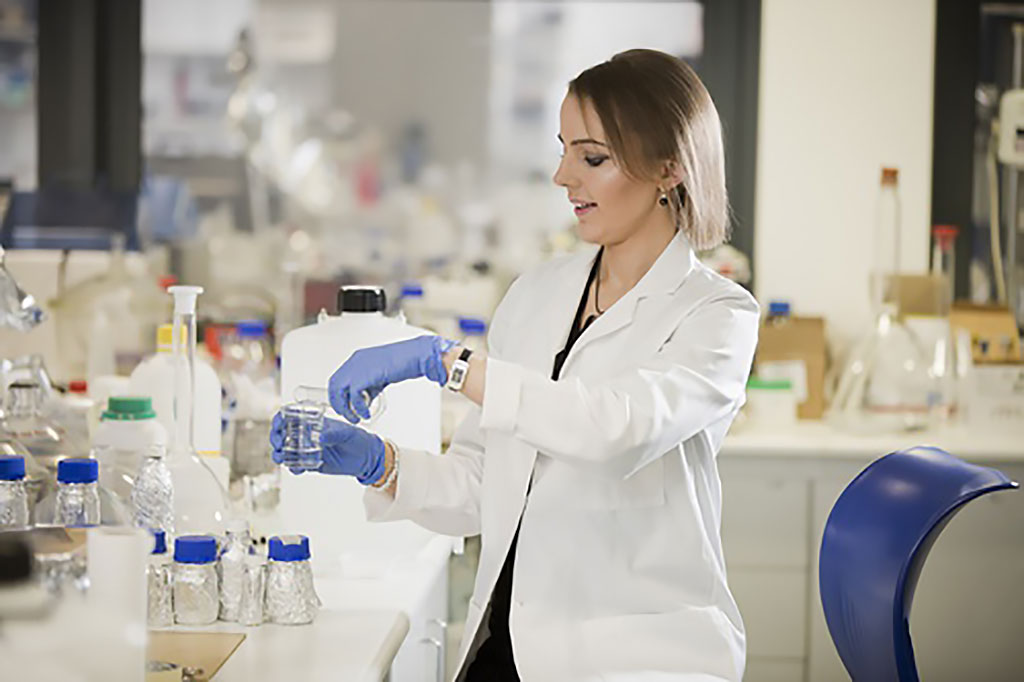 Image: Dr. Nicola Irwin applying the coating to a catheter (Photo courtesy of QUB)
A new antimicrobial coating for urinary catheters and other medical devices can significantly reduce pain and risk of infection, according to a new study.

The coating, developed at Queen's University Belfast (QUB; United Kingdom) and the University of Leeds (United Kingdom), was created using a unique mix of polymers that reduce the coefficient of friction values in polyvinyl chloride (PVC) biomaterials by more than 300-fold, due to hydration of the surface-localized polymer network. To test the coating, the researchers created a clinically relevant model of the urinary tract in order to simulate the mechanical and biological environments encountered in vivo.

The researchers found that lubrication capacity was retained following hydration for periods lasting up to 28 days in artificial urine during 200 cycles of applied frictional force, both at a physiologically normal pH 6, and also at pH 9, which represents infected urine. The modified surfaces also demonstrated good antibacterial activity, achieving adherence reduction of 99.8% in common hospital-acquired pathogens, such as Staphylococcus aureus and Proteus mirabilis. The antibacterial activity was achieved by adding chlorhexidine into the coating matrix. The study was published on March 4, 2020, in ACS Applied Bio Materials.

“Patients with poor control over their bladder function, for example those with urinary retention or drainage problems caused by neurological conditions such as spina bifida or spinal cord injuries may need catheterization up to eight times a day,” said lead author Nicola Irwin, PhD, of QUB. “Insertion and removal of poorly lubricated catheters causes friction between the urethral walls and the device surface, which is not only extremely painful, but upon regular use can lead to damage and narrowing of the urethra, bleeding, and infection.”

“People who use medical devices such as catheters on a daily basis are at high risk of persistent low-level infections, which, overtime, can cause antibiotic resistance, one the biggest global threats to society today, leading to longer hospital stays, higher medical costs, and increased risk of infection and even death,” said study co-author Professor Colin McCoy, PhD, of QUB. “It is vitally important we provide an alternative to the currently used devices, which have not changed much since their introduction almost 100 years ago, despite their widespread clinical and many associated limitations.”