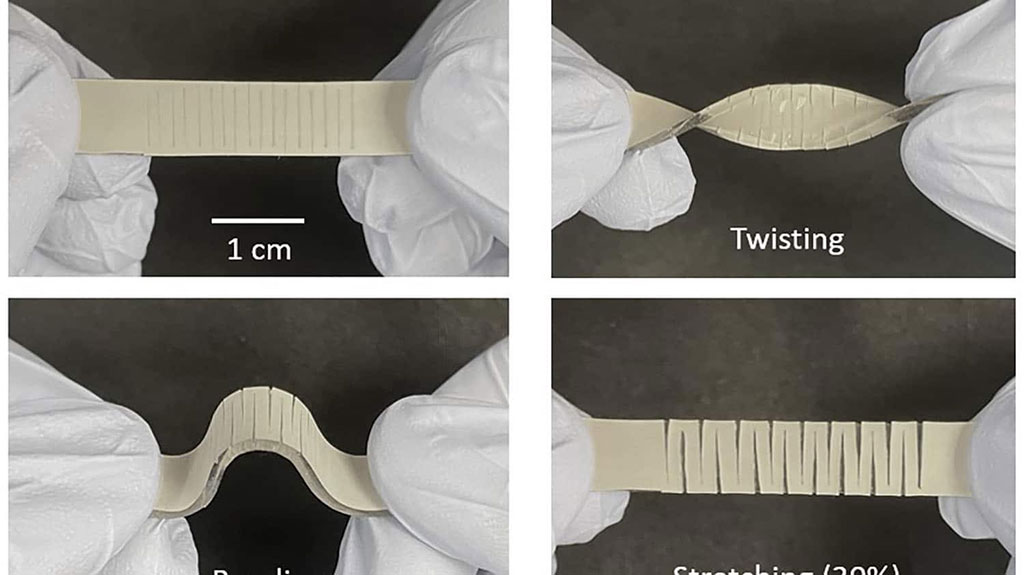 Strain is a measurement of how much a material deforms from its original length. For example, if you stretched a rubber band to twice its original length, its strain would be 100%. Measuring strain is useful in many applications, such as devices that measure blood pressure. However, strain sensors that are sensitive – capable of detecting small deformations – cannot be stretched very far, whereas sensors that can be stretched to greater lengths are typically not very sensitive. Now, researchers have developed a stretchable strain sensor that has an unprecedented combination of sensitivity and range, allowing it to detect even minor changes in strain with greater range of motion than previous technologies. The researchers demonstrated the sensor’s utility by creating new health monitoring and human-machine interface devices.

The new sensor developed by researchers at North Carolina State University (Raleigh, NC, USA) consists of a silver nanowire network embedded in an elastic polymer. The polymer features a pattern of parallel cuts of a uniform depth, alternating from either side of the material: one cut from the left, followed by one from the right, followed by one from the left, and so on. The sensor measures strain by measuring changes in electrical resistance. As the material stretches, resistance increases. The cuts in the surface of the sensor are perpendicular to the direction that it is stretched. This does two things. First, the cuts allow the sensor to deform significantly. Because the cuts in the surface pull open, creating a zigzag pattern, the material can withstand substantial deformation without reaching the breaking point. Second, when the cuts pull open, this forces the electrical signal to travel further, traveling up and down the zigzag.

“The new sensor we’ve developed is both sensitive and capable of withstanding significant deformation,” said Yong Zhu, corresponding author of a paper on the work and the Andrew A. Adams Distinguished Professor of Mechanical and Aerospace Engineering at NC State.. “An additional feature is that the sensor is highly robust even when over-strained, meaning it is unlikely to break when the applied strain accidently exceeds the sensing range.”

“To demonstrate the sensitivity of the new sensors, we used them to create new wearable blood pressure devices,” Zhu added. “And to demonstrate how far the sensors can be deformed, we created a wearable device for monitoring motion in a person’s back, which has utility for physical therapy.”