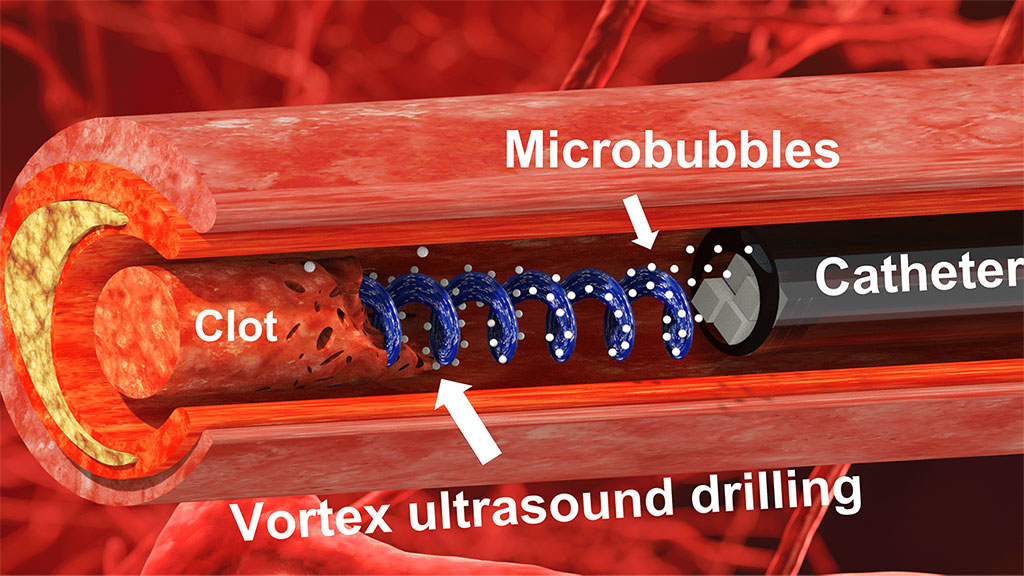 Cerebral venous sinus thrombosis (CVST) is known to occur when a blood clot forms in the veins responsible for draining blood from the brain. Catheterization or surgical intervention always poses a risk of harm, such as damage caused to the blood vessel itself. Now, researchers have developed a new tool and technique that uses “vortex ultrasound” – a sort of ultrasonic tornado – to break down blood clots in the brain. The researchers found that the new approach was quicker in eliminating clots formed in an in vitro model of CVST as compared to the existing techniques.

The new tool developed by researchers at North Carolina State University (Raleigh, NC, USA) consists of a single transducer that has been specifically designed to create the swirling, vortex effect. The transducer is so small that it can be incorporated into a catheter, which is then fed through the circulatory system to the site of the blood clot. The researchers conducted proof-of-concept in vitro testing by using cow blood in a 3D-printed model of the cerebral venous sinus and found that the new tool could dissolve an acute blood clot in less than 30 minutes. Additionally, the researchers performed experiments by applying vortex ultrasound to animal blood vein samples and found there was no damage to the walls of the blood vessels. They also conducted tests to determine whether the vortex ultrasound caused significant damage to red blood cells and found no substantial damage.

“Our previous work looked at various techniques that use ultrasound to eliminate blood clots using what are essentially forward-facing waves,” said Xiaoning Jiang, co-corresponding author of the study. “Our new work uses vortex ultrasound, where the ultrasound waves have a helical wavefront. In other words, the ultrasound is swirling as it moves forward. Based on our in vitro testing, this approach eliminates blood clots more quickly than existing techniques, largely because of the shear stress induced by the vortex wave.”

“The fact that our new technique works quickly is important, because CVST clots increase pressure on blood vessels in the brain. This increases the risk of a hemorrhage in the brain, which can be catastrophic for patients,” added Chengzhi Shi, co-corresponding author of the study. “Existing techniques rely in large part on interventions that dissolve the blood clot. But this is a time-consuming process. Our approach has the potential to address these clots more quickly, reducing risk for patients.”