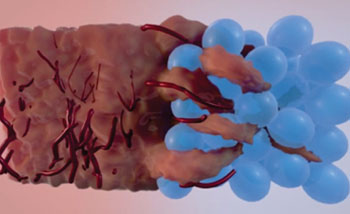 Developed by researchers at the University of California, Los Angeles (UCLA; USA), the injected hydrogel—filled with the microscopic synthetic polymer MAP spheres, each about the width of a human hair—forms a packed cluster that completely fills the wound cavity. New tissue quickly grows into the voids between the microspheres; as the MAP spheres degrade into the body, a matrix of repair tissue is left where the wound once was. New tissue then continues to grow until the wound is completely healed.

The researchers succeeded in demonstrating that the MAP hydrogel can promote the growth of new cells and formation of networks of connected cells at previously unseen rates. During in vivo tests, the researchers observed significant tissue regeneration in the first 48 hours, with much more healing over five days compared to other materials in use today. According to the researchers, the combination of microporosity and injectability will enable novel routes to tissue regeneration. The study was published on June 2, 2015, in Nature Materials.

“The beauty of the MAP gel is that there are no other added growth factors that other technologies require to attract cells into the material,” said study coauthor Westbrook Weaver, PhD, of the UCLA Henry Samueli School of Engineering and Applied Science. “The geometry of the MAP gel networks entices cells to migrate into the gel without the need for anything other than a cell adhesive peptide, so that the cells can grab onto the gels.”