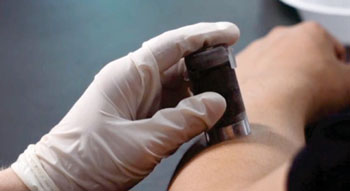 Image: The Comfortably Numb device (Photo courtesy of Rice University).
A novel prototype device numbs the skin prior to an injection by producing a rapid chemical reaction that cools the patient’s skin.

Developed by a team of freshman engineering students at Rice University (Rice, Houston, TX, USA), the “Comfortably Numb” device consists of two sealed, separated chambers containing ammonium nitrate and water. A simple twisting motion moves the chambers into an alignment that allows the chemicals to flow together through the chamber, producing a rapid endothermic reaction. The device’s metal surface plate is then pressed against the skin, producing a numbing effect.

The functioning prototype of the device has been shown to produce a measurable numbing effect in just 60 seconds. The device was also designed as single-use rather than reusable, since cleaning it for each patient and resetting the chambers would be time-consuming and cumbersome. The design team is currently in the process of applying for a provisional patent for the device, and hopes to continue their work together in their spare time when they return to Rice as sophomores.

“We are targeting anyone who has to get an injection, which is nearly everyone. But the device is especially applicable to people who are more susceptible to pain, such as the elderly and children,” said design team member computer science major Greg Allison. “It’s intended for use during procedures where you have to get shots in more sensitive areas of the body, such as the face or the groin.”

“We looked into all sorts of methods for numbing, both quick and long-term, chemicals, using ice packs, which is similar to what we’re using now,” added team member mechanical engineering major Mike Hua. “We explored everything that surrounded the problem before we even began brainstorming. At the end of the day, what we’re creating is a self-contained device with a very cold contact surface, and there are many applications for that.”