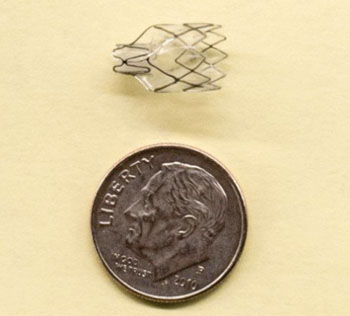 The Zephyr endobronchial valve (EBV) prevents airflow from entering into the diseased region while allowing trapped air and fluids to escape, thus achieving lung volume reduction. The unidirectional valves—either 4 mm or 5.5 mm in size—are implanted in a minimally invasive procedure using a bronchoscope equipped with a video camera. During the 60-minute procedure, 3–5 Zephyr valves are placed in the problematic airways of the lung. Once deployed, the self-expanding valve conforms to the bronchial wall and forms an air-tight seal, blocking airflow to the diseased regions.

A proprietary diagnostic device, the Chartis system, is utilized prior to the procedure to identify likely responders by measuring precise flow and pressure readings for specific lobes in the lungs to assess collateral ventilation. The system is based on a balloon catheter inserted through a bronchoscope to the target airway, which is inflated to block flow to the target region. The system then calculates airway resistance and measures closing volume (CV) in isolated lobes in the lung. A console displays expiratory air flow, pressure, and resistance measurements. The Zephyr EBV and Chartis system are products of PulmonX (Redwood City, CA, USA).

“The idea behind all lung-volume-reduction procedures is to allow the diaphragm to return to its normal shape and function. We're looking for a less invasive way to achieve that goal without the risks inherent in surgery,” said Associate Professor Mark Dransfield, MD, medical director of Lung Health Center at the University of Alabama at Birmingham (UAB; USA). “Patients need to have enough healthy lung tissue so that the blockage of the most diseased and damaged areas, and the reduced lung volume, will allow the healthier areas to function more normally.”

Advanced emphysema is a chronic, debilitating disease that causes irreversible damage to delicate lung tissue. It is characterized by reduced lung function, increased lung volume, and loss of the lung's natural elastic properties which makes breathing difficult. As the disease progresses and lung tissue is destroyed, excess air is trapped in the lungs, making it difficult for the person to exhale. This hyperinflation is responsible for feeling “short of breath,” manifested by continuous fatigue, chronic coughing, wheezing, and frequent respiratory infections.

PulmonX
University of Alabama at Birmingham