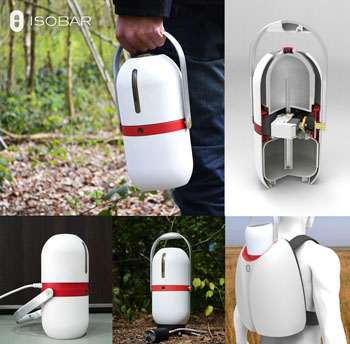 The Isobar device, developed by Loughborough University (United Kingdom) graduate William Broadway as part of his final year project, uses a chemical refrigeration process invented by Dr. Albert Einstein in 1906 to maintain stable temperature control (2-8 ˚C) for up to 30 days. The core principal of the technology relies upon heat to separate ammonia from a two-phase mix of ammonia and water into an upper chamber. When needed, a valve is opened to let the ammonia evaporate into the original chamber, giving a powerful cooling effect.

The key innovation of the Isobar lies in the way the effect is controlled and recharged. It is controlled using an automated valve that monitors the internal temperature of the insulated vaccine backpack, and recharged using either an internal electric heating element or with an external propane burner. The simplicity of the system allows it to be adapted to logistical problems such as transport, or infrastructure breakdowns that could lead to the vaccines loosing potency. The Isobar has been announced as the UK winner of the 2016 James Dyson design award.

“I used the maximum load carriage for how many vaccines a small women from India can carry to design a 1.6 liter unit that is capable of delivering 2,460 0.5ml doses of vaccine over six days, without the need to recharge,” said inventor William Broadway. “It can be sustainably recharged in an hour using a 900w heating element for day-to-day use, and a propane burner that can be recharged on-the-go in case of emergency for up to 30-days. The propane burner and pressure unit was designed to limit the energy input to meet international safety standards.”

The principal application of technology was developed by hobbyists in 1929 into a commercial cooling unit called the Icyball. Since then the technology has been widely forgotten, due to the introduction of electric refrigerators. But since absorption refrigeration requires no fans, pumps, or any moving parts to work, original Icyball units from that time are still working, 85 years after their introduction.