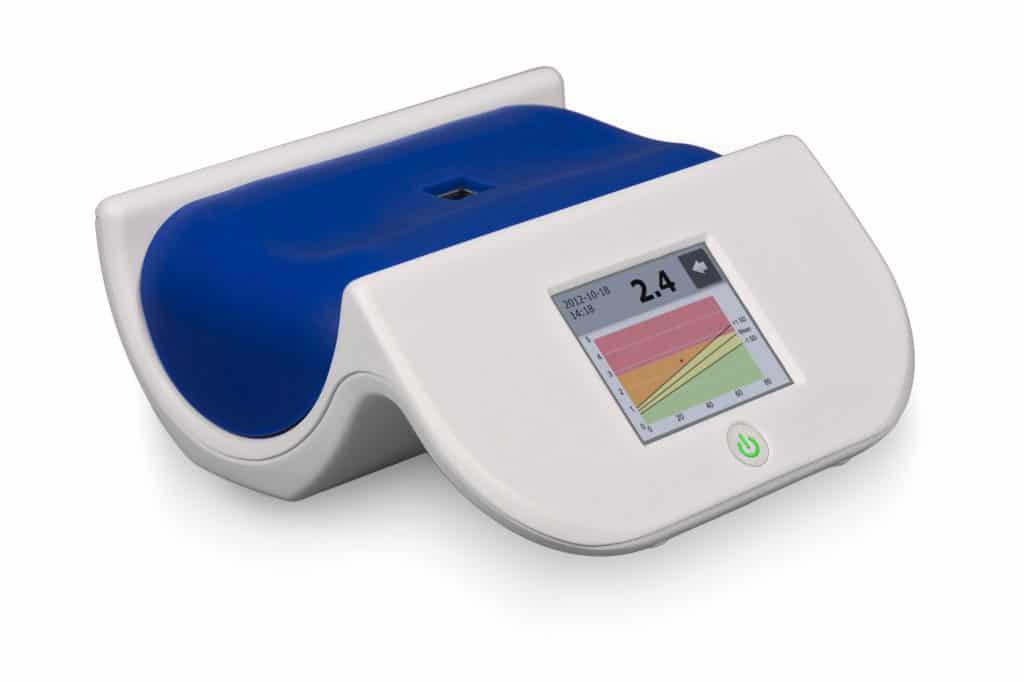 Image: The AGE reader used in the study (Photo courtesy of Diagnoptics Technologies).
Non-invasive skin autofluorescence can predict type 2 diabetes (T2D), cardiovascular disease (CVD), and mortality in the general population, according to a new study.

Researchers at University Medical Center Groningen (UMCG; The Netherlands), Medical Center Leeuwarden (The Netherlands), and other institutions conducted a prospective analysis study to examine if the measurement of skin autofluorescence can predict risk of incident T2D, CVD, and mortality. The study included 72,880 participants of the Dutch Lifelines Cohort Study, who underwent baseline investigations between 2007-2013, had validated baseline skin autofluorescence values available, and were not known to have T2D or CVD.

The results revealed that after a median follow-up of four years, 1.4% of participants developed T2D, 1.7% were diagnosed with CVD, and 1.3% had died. Baseline skin autofluorescence was elevated in all three groups, compared with those who lived and remained free of the two diseases. The researchers also found that skin autofluorescence predicted development of T2D, CVD and mortality independently of traditional risk factors, such as the metabolic syndrome, blood glucose, and HbA1c. The study was published on November 21, 2018, in Diabetologia.

“Both previous and present findings support the clinical utility of skin autofluorescence as a first screening method for type two diabetes, cardiovascular disease, and mortality,” concluded lead author Robert van Waateringe, MD, of UMCG, and colleagues. “The quick, noninvasive, measurement of skin autofluorescence may even allow use in nonmedical settings or public locations such as supermarkets, pharmacies, or drug stores as a first estimate of risk.”

Skin autofluorescence is a noninvasive method of assessing the accumulation of advanced glycation end products (AGEs) with fluorescent properties in dermal tissue. AGEs are formed in a multistep process by glycation and oxidation of free amino groups of proteins, lipids, and nucleic acids. They can cause an increase in vascular stiffness and elevated blood pressure, accelerate the progression of atherosclerosis, and may also worsen hyperglycemia by increasing inflammation and oxidative stress in beta cells. Skin autofluorescence increases with ageing, is elevated in people with T2D, as well as with the individual components of metabolic syndrome.