Whales Could Hold the Answer for Synthetic Blood 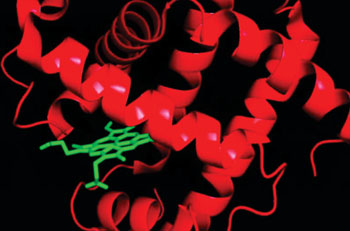 Researchers at Rice University (Rice, Houston, TX, USA) and the University of Washington (Seattle, USA) conducted a study comparing naturally occurring mammalian myoglobins (Mb) from humans, whales, and other deep-diving mammals. They found that all forms had a common characteristic shape that included a “heme pocket” (much like the pocket of a baseball glove) that traps and releases oxygen. The amount of fully active Mb expressed was directly and strongly dependent on the stability of the heme-free form of Mb, called apomyoglobin (apoMb).

But while the overall shape of Mb in different species is similar, including the shape of their heme pockets, subtle differences in their amino acid sequences causes the more stable myoglobins to better retain their shapes. This underlying stability, however, only becomes apparent when studying the heme-free, apoMb version of the protein. In the study, the researchers confirmed quantitatively that all deep diving mammals have apoMb up to 60 times more stable than human apoMb.

The researchers also systematically analyzed the genes and available information for all mammalian Mbs, including those from 250 deep-diving species, and found that those from aquatic mammals had large positive surface charges compared with those from land animals. They hypothesized that the charge differences allowed aquatic species to pack more Mb into their muscle cells than humans. Finally, the researchers confirmed that the stability of apoMb is directly correlated with expression levels; while very little human Mb is expressed, whales can express 10- to 20-fold higher amounts.

According to the researchers, the results could be used to engineer a strain of bacteria that could generate massive quantities of apoMb that could then be incorporated into synthetic blood for use in transfusions. Since hospitals and trauma specialists currently rely on donated whole blood, which is often in short supply and has a limited storage life, success could mean many more lives saved. The study was published in the September 2015 issue of the Journal of Biological Chemistry.


“Whales and other deep-diving marine mammals can ‘download’ oxygen directly into their skeletal muscles and stay active even when they are holding their breath,” said biochemist Prof. John Olson, PhD, of Rice University. “The reason whale meat is so dark is that it’s filled with myoglobin that is capable of holding oxygen. But when the myoglobin is newly made, it does not yet contain heme. We found that the stability of heme-free myoglobin is the key factor that allows cells to produce high amounts of myoglobin.”