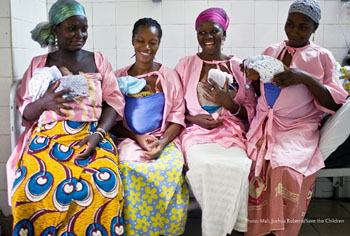 Image: Four mothers in Mali sharing the KMC experience (Photo courtesy of Joshua Robers/ Save the Children).
A new study demonstrates that kangaroo mother care (KMC) is associated with reduced mortality among infants of any birth weight or gestational age.

Researchers at the Harvard School of Public Health (HSPH; Boston, MA, USA) conducted a systematic review and meta-analysis of observational studies through April 2014 that examined the relationship between KMC and outcomes among infants of any birth weight or gestational age. Studies with fewer than ten participants, lack of a comparison group without KMC, and those not reporting a quantitative association were excluded. Two reviewers then extracted data from 124 studies that met criteria on risk of bias, KMC intervention, neonatal outcomes, and relative risk (RR).

The researchers found that KMC correlated with 36% lower mortality among low birth weight newborns, compared with conventional care. KMC also correlated with reduced risks of neonatal sepsis, hypothermia, hypoglycemia, and hospital readmission, as well as with increased exclusive breastfeeding. KMC was also associated with lower mean respiratory rate and pain measures in newborns and with higher oxygen saturation, temperature, and head circumference growth. The study was published online on December 23, 2015, in Pediatrics.


“KMC is protective against a wide variety of adverse neonatal outcomes and has not shown evidence of harm,” concluded lead author Ellen O. Boundy, ScD, and colleagues. “This safe, low-cost intervention has the potential to prevent many complications associated with preterm birth and may also provide benefits to full-term newborns.”

KMC was introduced in 1978 by Edgar Rey Sanabria, MD, in Bogotá (Colombia) as an alternative to incubators for low birth weight infants. KMC has four components: early, continuous, and prolonged skin-to-skin contact (SSC) between the newborn and mother; exclusive breastfeeding; early discharge from the health facility; and close follow-up at home. It is thought to improve neonatal outcomes by maintaining the infant’s temperature and other vital sign parameters through SSC and by providing the benefits of breastfeeding. These effects are considered beneficial for all newborns, but may be especially advantageous for preterm infants.