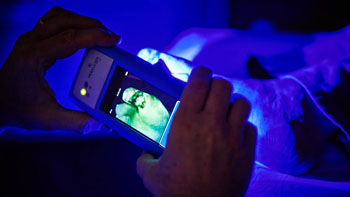 The MolecuLight i:X is a handheld fluorescence imaging device for rapid visualization and quantitative tracking of bacterial contamination, wound healing, and connective tissue remodeling of surgical sites and wounds at the point-of-care. The device is based on detection and analysis of intrinsic fluorescence signals emitted by tissues and microbes when illuminated with specific wavelengths of light, without the need of contrast agents. Images can be captured and documented as either stills or videos of wounds, including the surrounding areas where potentially harmful bacteria may be lurking.

MolecuLight i:X illuminates the wound with a narrow band of violet light that causes endogenous fluorophores in the bacteria to fluoresce. Susceptible bacteria include Staphylococcus aureus and MRSA; Pseudomonas aeruginosa; Escherichia coli; Coagulase-negative staphylococci; multiple Enterococcus species; multiple Proteus species; Klebsiella pneumonia; Beta-hemolytic streptococci (Group B); and multiple Enterobacter species. It is recommended that imaging be performed after surface blood has been removed from the wound bed and periwound areas.

In a study to evaluate the effectiveness of the device, seven patients were followed for four months to track and document progression of wound size and bacterial load in situ. The results showed that the device enabled real-time visualization of discrete focal areas of bacterial colonization in large midline abdominal wounds, with a sensitivity of 80% and a specificity of 70%, thus reducing the likelihood of unnecessary antibiotic treatment. The MolecuLight i:X is a product of MolecuLight (Toronto, Canada), and has received the European Community CE mark of approval.

“With our device already approved for use in Canada and now available in the EU, we believe that in time the MolecuLight i:X will become the stethoscope of wound care worldwide,” said Craig Kennedy, CEO of MolecuLight. “We are eager to begin our commercialization efforts in Europe, starting with the World Union of Wound Healing Societies congress in Florence later this month.”

“By helping clinicians see potentially harmful bacteria levels in real-time at the bedside, we are advancing wound healing by providing a more personalized and effective approach,” said Ralph DaCosta, PhD, founder and chief scientific officer of MolecuLight. “Soon, we will be including additional functionality to also easily and quickly measure wound size. All integrated on the same device.”