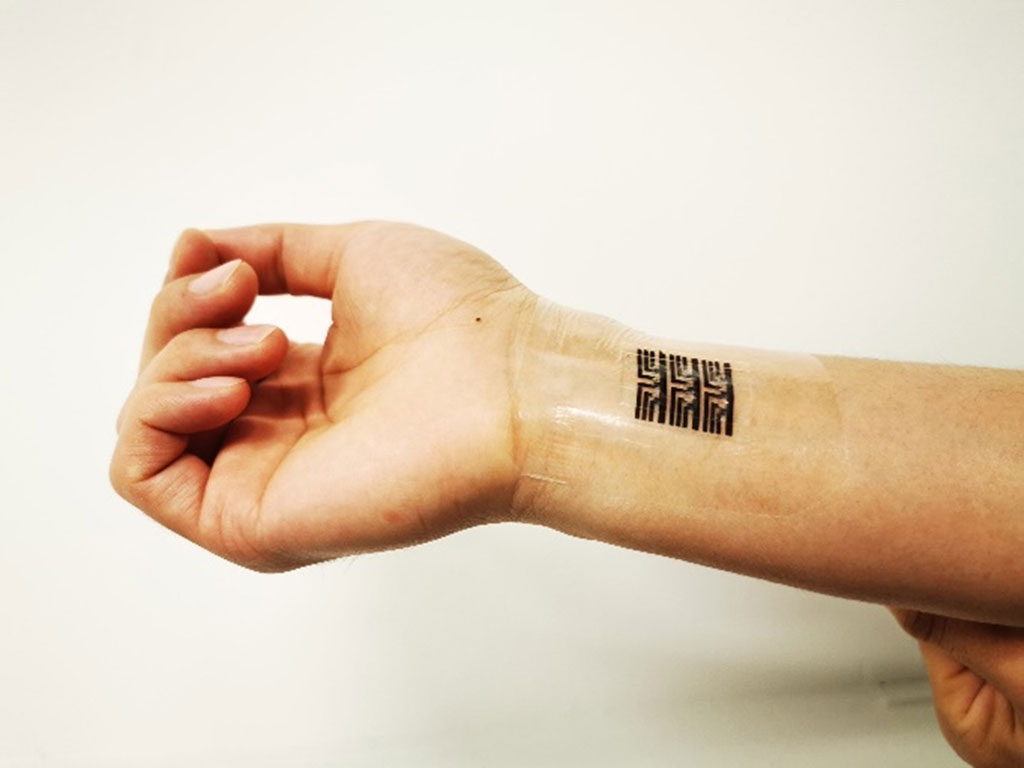 Today, getting an in-depth profile about one’s health requires a visit to a hospital or clinic. But in the future, people’s health could be tracked continuously by wearable electronics that can detect disease even before symptoms appear. Unobtrusive, wearable computing devices are one step toward making this vision a reality. Now, a brainy Band-Aid, a smart watch without the watch, marks a leap forward for wearable health technologies.

Researchers from Pritzker School of Molecular Engineering (PME) at The University of Chicago (Chicago, IL, USA) have developed a flexible, stretchable computing chip that processes information by mimicking the human brain. The device aims to change the way health data is processed. The future of healthcare that many envision includes wearable biosensors to track complex indicators of health including levels of oxygen, sugar, metabolites and immune molecules in people’s blood. One of the keys to making these sensors feasible is their ability to conform to the skin. As such skin-like wearable biosensors emerge and begin collecting more and more information in real-time, the analysis becomes exponentially more complex. A single piece of data must be put into the broader perspective of a patient’s history and other health parameters.

Today’s smart phones are not capable of the kind of complex analysis required to learn a patient’s baseline health measurements and pick out important signals of disease. However, cutting-edge artificial intelligence (AI) platforms that integrate machine learning to identify patterns in extremely complex datasets can do a better job. But sending information from a device to a centralized AI location is not ideal. The PME research team set out to design a chip that could collect data from multiple biosensors and draw conclusions about a person’s health using cutting-edge machine learning approaches. Importantly, they wanted it to be wearable on the body and integrate seamlessly with skin. For this, the researchers turned to polymers, which can be used to build semiconductors and electrochemical transistors but also have the ability to stretch and bend.

The researchers assembled polymers into a device that allowed the AI-based analysis of health data. Rather than work like a typical computer, the chip - called a neuromorphic computing chip -functions more like a human brain, able to both store and analyze data in an integrated way. To test the utility of their new device, the researchers used it to analyze electrocardiogram (ECG) data representing the electrical activity of the human heart. They trained the device to classify ECGs into five categories - healthy or four types of abnormal signals. Then, they tested it on new ECGs. Whether or not the chip was stretched or bent, they showed, it could accurately classify the heartbeats. More work is needed to test the power of the device in deducing patterns of health and disease. But eventually, it could be used either to send patients or clinicians alerts, or to automatically tweak medications. The researchers are already planning new iterations of the device to both expand the type of devices with which it can integrate and the types of machine learning algorithms it uses.

“With this work we’ve bridged wearable technology with AI and machine learning to create a powerful device which can analyze health data right on our own bodies,” said Sihong Wang, a materials scientist and Assistant Professor of Molecular Engineering. “Integration of AI with wearable electronics is becoming a very active landscape. This is not finished research, it’s just a starting point.”

Related Links:
The University of Chicago