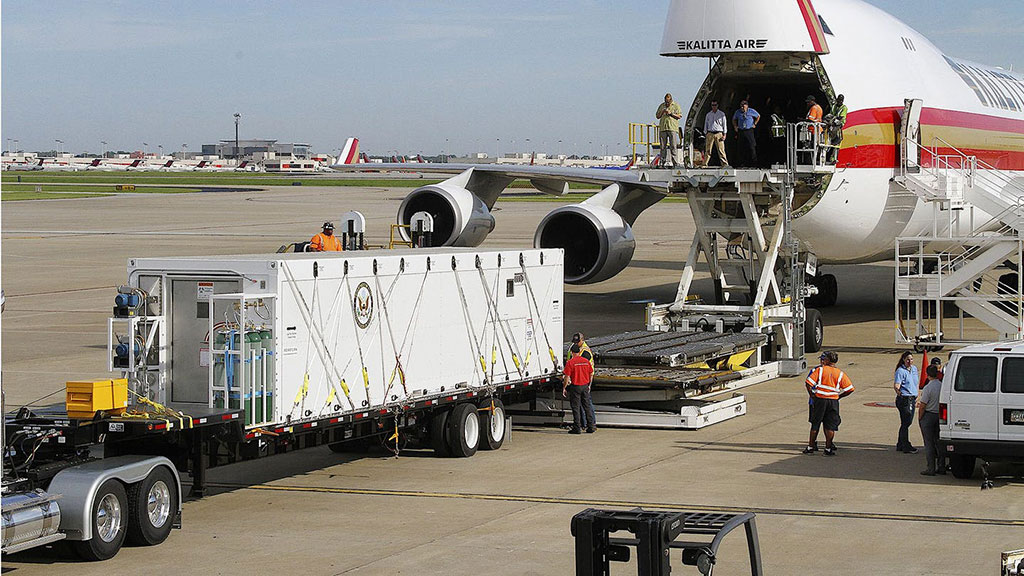 Image: The CBCS being loaded onto a Kalitta Air 747-400ERF (Photo courtesy of Phoenix Air)
A specialized biocontainment area installed into a chartered evacuation aircraft has been used to evacuate 14 U.S. citizens who tested positive for coronavirus from the Diamond Princess cruise ship for medical care in the United States.

Developed by MRI Global (Kansas City, MI, USA), the state-of-the-art, flight-ready containerized biocontainment system (CBCS) is a reusable bio-containment and medical treatment unit designed to operate on any government or civilian cargo aircraft. Originally developed to treat Ebola victims, the CBCS can be used for the transport of carriers of all highly pathogenic organisms. CBCS units feature three rooms: a patient treatment area for four patients and four caregivers; an ante room to safely don and doff personal protective equipment; and a rest area for two caregivers.

Pilots can cargo the CBCS in both private and military aircraft, confident that the biocontainment is safe. The units are designed to survive crash loads and rapid decompression, as per U.S. department of defense (DOD) Safe-to-Fly standards, and the entire CBCS can be rapidly de-contaminated and returned to service. All 340 U.S. citizens on the cruise ship, including the 14 infected, were transported on two commercial Kalitta Air 747-400ERF freighters, one of which was loaded with a CBCS, and are already receiving medical treatment in the U.S., rather in Yokohama (Japan).

“We're proud to play a part in helping to safely evacuate people out of harm's way to locations where they can receive appropriate medical care,” said Dean Gray, PhD, a director at MRIGlobal. “There's nothing like the CBCS for flyable medical transport. It was developed to respond to critical global health situations like the coronavirus outbreak, and ultimately to save lives. To date, MRIGlobal has designed and delivered four CBCS units, which are in use by the U.S. government.”

The development of the CBCS system began in 2014, with a USD five million public-private partnership grant from the U.S. State Department to the Paul G. Allen Family Foundation. Following an Ebola outbreak in West Africa in 2013, which turned into a major regional crisis, Paul Allen, a Microsoft co-founder who passed away in 2018 due to cancer, had expressed an interest to the U.S. government in using some of his considerable wealth in helping to combat the Ebola virus.