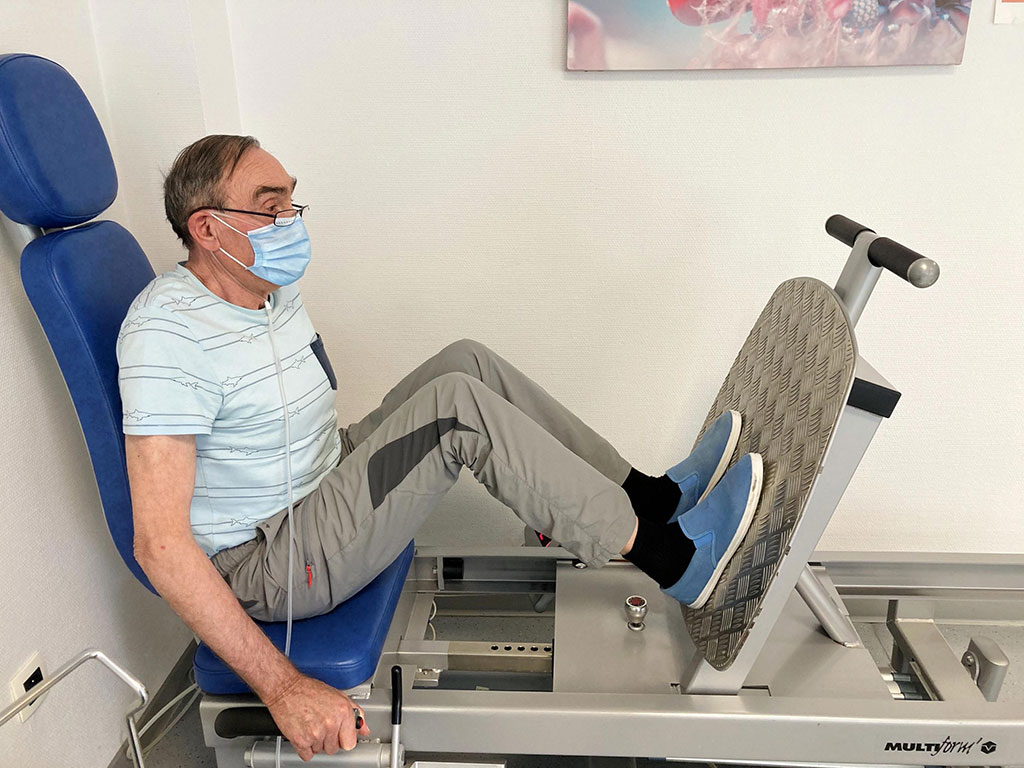 Image: Image shows a recovering COVID-19 patient taking part in rehabilitation programme (Photo courtesy of Frédéric Hérengt)
COVID-19 patients can suffer long-term lung and heart damage but, for many, this tends to improve over time, according to the first, prospective follow-up of patients infected with the coronavirus, presented at the European Respiratory Society International Congress.

For their study, researchers from the University Clinic of Internal Medicine (Innsbruck, Austria) recruited consecutive coronavirus patients to their study who were hospitalized. The patients were scheduled to return for evaluation six, 12 and 24 weeks after their discharge from hospital. During these visits, clinical examinations, laboratory tests, analysis of the amounts of oxygen and carbon dioxide in arterial blood, lung function tests, computed tomography (CT) scans and echocardiograms were carried out. At the time of their first visit, more than half of the patients had at least one persistent symptom, predominantly breathlessness and coughing, and CT scans still showed lung damage in 88% of patients. However, by the time of their next visit 12 weeks after discharge, the symptoms had improved and lung damage was reduced to 56%.

The CT scans showed that the score that defines the severity of overall lung damage decreased from eight points at six weeks to four points at twelve weeks. Damage from inflammation and fluid in the lungs caused by the coronavirus, which shows up on CT scans as white patches known as ‘ground glass’, also improved.

“The bad news is that people show lung impairment from COVID-19 weeks after discharge; the good news is that the impairment tends to ameliorate over time, which suggests the lungs have a mechanism for repairing themselves,” said Dr. Sabina Sahanic, who is a clinical PhD student at the University Clinic in Innsbruck and part of the team that carried out the study. “The findings from this study show the importance of implementing structured follow-up care for patients with severe COVID-19 infection. Importantly, CT unveiled lung damage in this patient group that was not identified by lung function tests. Knowing how patients have been affected long-term by the coronavirus might enable symptoms and lung damage to be treated much earlier and might have a significant impact on further medical recommendations and advice.”

“The most important finding was that patients who were admitted to pulmonary rehabilitation shortly after leaving intensive care, progressed faster than those who spent a longer period in the pulmonary ward where they remained inactive,” said Chikhanie. “The sooner rehabilitation started and the longer it lasted, the faster and better was the improvement in patients’ walking and breathing capacities and muscle gain. Patients who started rehabilitation in the week after coming off their ventilators progressed faster than those who were admitted after two weeks.”