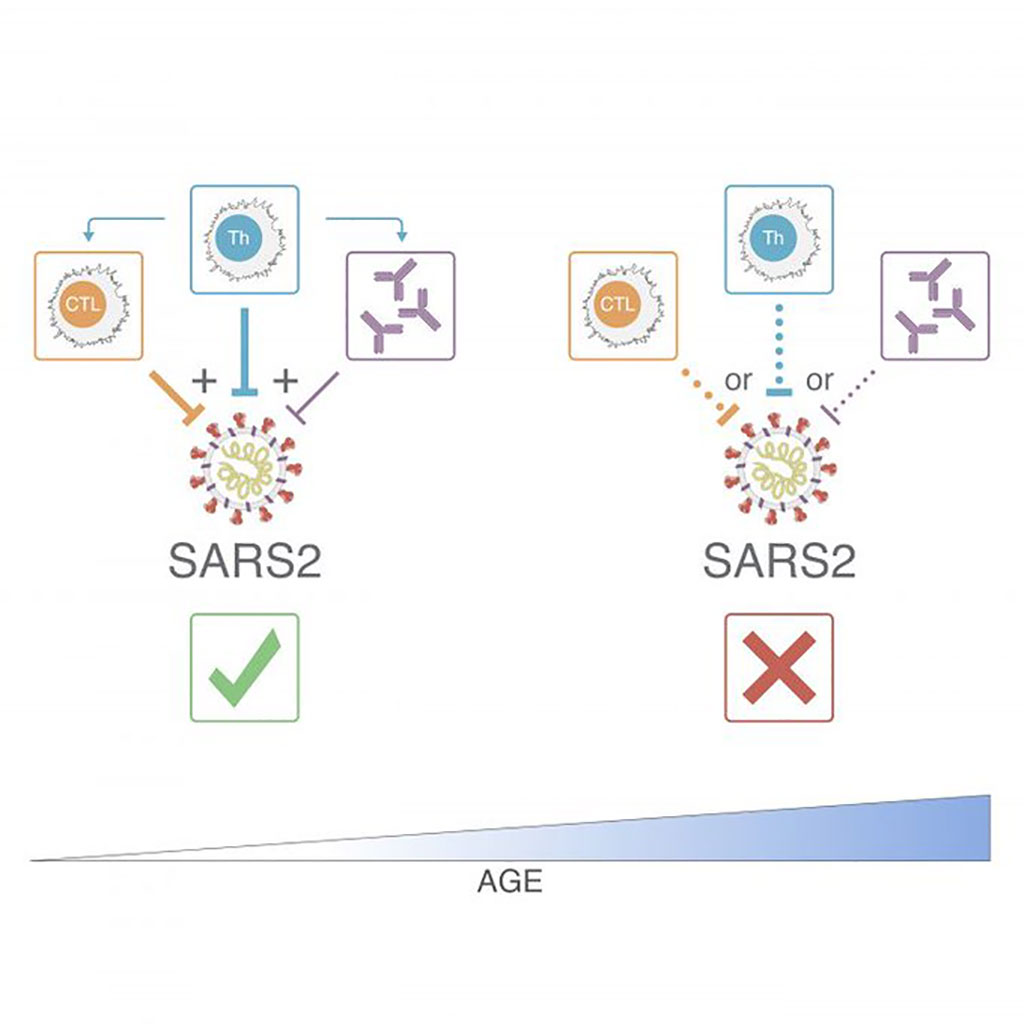 Image: A multi-layered, virus-specific immune response is important for controlling the virus during the acute phase of the infection and reducing COVID-19 disease severity (Photo courtesy of Crotty Lab/Cell Press)
A new study has found that T cells take the lead in controlling SARS-CoV-2 and reducing COVID-19 disease severity, suggesting that vaccine candidates should aim to elicit a broad immune response that include antibodies, helper and killer T cells to ensure protective immunity.

Ever since SARS-CoV-2 first appeared, researchers have been trying to understand whether sometimes the immune system does more harm than good during the acute phase of COVID-19. The latest study by researchers at the La Jolla Institute for Immunology (La Jolla, CA, USA) clearly argues in favor of the immune system. Their study confirms that a multi-layered, virus-specific immune response is important for controlling the virus during the acute phase of the infection and reducing COVID-19 disease severity, with the bulk of the evidence pointing to a much bigger role for T cells than antibodies. A weak or uncoordinated immune response, on the other hand, predicts a poor disease outcome.

“When we looked at a combination of all of our data across all 111 measured parameters we found that in general, people who mounted a broader and well-coordinated adaptive response tended to do better. A strong SARS-CoV-2 specific T cell response, in particular, was predictive of milder disease,” said co-first author and postdoctoral research Carolyn Moderbacher, Ph.D. “Individuals whose immune response was less coordinated tended to have poorer outcomes.”

The effect was magnified when the researchers broke down the dataset by age. “People over the age of 65 were much more likely to have poor T cell responses, and a poorly coordinated immune response, and thus have much more severe or fatal COVID-19,” said senior author Shane Crotty, Ph.D., who co-led the study. “Thus, part of the massive susceptibility of the elderly to COVID-19 appears to be a weak adaptive immune response, which may be because of fewer naïve T cells in the elderly.”

Naïve T cells are inexperienced T cells that have not met their viral match yet and are waiting to be called up. As we age, the immune system’s supply of deployable naïve T cells dwindles and fewer cells are available to be activated to respond to a new virus. “This could either lead to a delayed adaptive immune response that is unable to control a virus until it is too late to limit disease severity or the magnitude of the response is insufficient,” said Moderbacher.

In line with what other research teams had found before, antibodies don’t seem to play an important role in controlling acute COVID-19. Instead, T cells and helper T cells in particular are associated with protective immune responses. If a vaccination is successful, vaccine-induced antibodies are ready to intercept the virus when it shows up at the doorstep. In contrast, in a normal infection the virus gets a head start because the immune system has never seen anything like it. By the time the adaptive immune system is ready to go during a primary infection, the virus has already replicated inside cells and antibodies can’t get to it.