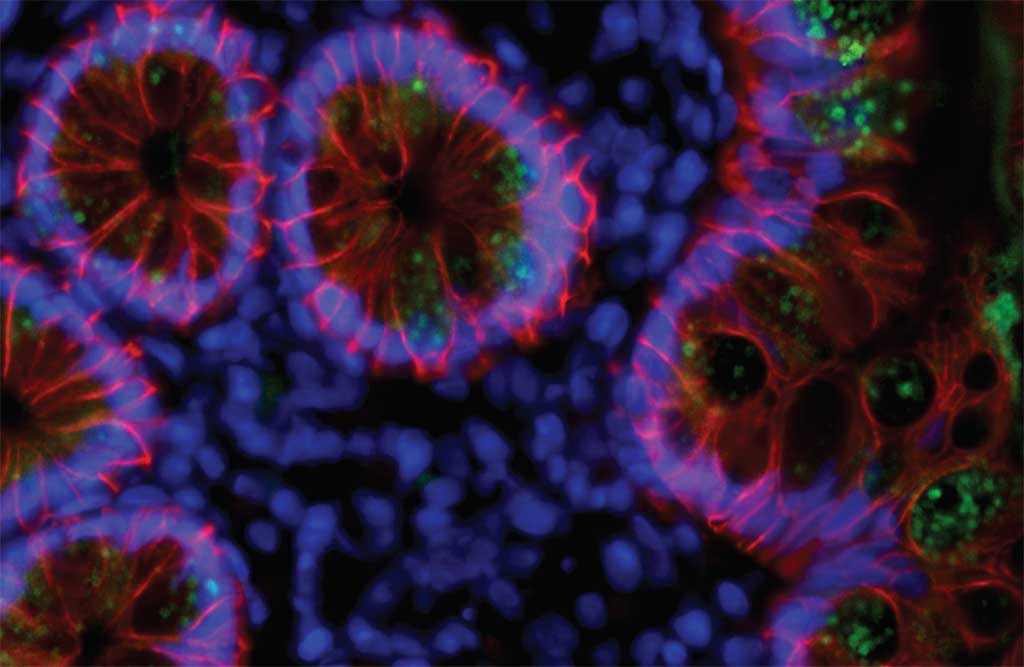 Image: Scientists found traces of SARS-CoV-2 (green) in cells lining people’s intestines three months after infection. Antibodies may evolve in response to these residual viral traces (Photo courtesy of C. Gaebler et al)
A new antibody analysis has revealed that people who have recovered from coronavirus can make potent antibodies to SARS-CoV-2 that evolve in the months after infection in response to residual viral antigen hidden in the gut.

The antibody analysis by immunologists at the Howard Hughes Medical Institute (Chevy Chase, MD, USA) has shown that people who doctors consider to be recovered from COVID-19 produce SARS-CoV-2 virus-fighting antibodies that rapidly evolve in the months following an infection. The results suggest that the immune systems of people previously infected with COVID-19 might have defenses ready if exposed to the SARS-CoV-2 virus again.

For their antibody analysis, the team of immunologists began recruiting people who had recovered from COVID-19 in April during the height of the pandemic in New York. The researchers collected blood from 149 participants and combed it for immune cells that make protective antibodies - those that zero in on the virus and block its entry into cells. These antibodies might also serve as a blueprint for a new drug - molecules that scientists could purify, produce in mass quantities, and then give to patients to prevent or treat COVID-19.

The researchers found that one month after infection, all the 149 participants had coronavirus-fighting antibodies. The level of these antibodies in the blood was generally low, but their presence in so many people was a bright sign for vaccine development. A vaccine that boosts production of these antibodies could be effective in a broad population of people, the team suggested.

The researchers took a closer look at the antibodies of six participants and discovered antibodies that were especially effective. The team has conducted more than a dozen studies examining two of these exceptional antibodies. In a study, the researchers found that when combined in a cocktail, they can protect mice from SARS-CoV-2 infection. The team has also seen promising results in rhesus macaques. The team is now planning a Phase 1 clinical trial to test the safety of the antibodies in people although a potential therapy could still be a long way off.

“The really good news is that people who are infected are very unlikely to become sick again for at least six month,” said Michel Nussenzweig, an investigator at the Howard Hughes Medical Institute and an immunologist at The Rockefeller University.

“Our results showed that it’s not hard for our immune systems to make effective antibodies to SARS-CoV-2,” said Christian Gaebler, a physician and immunologist in Nussenzweig’s lab.