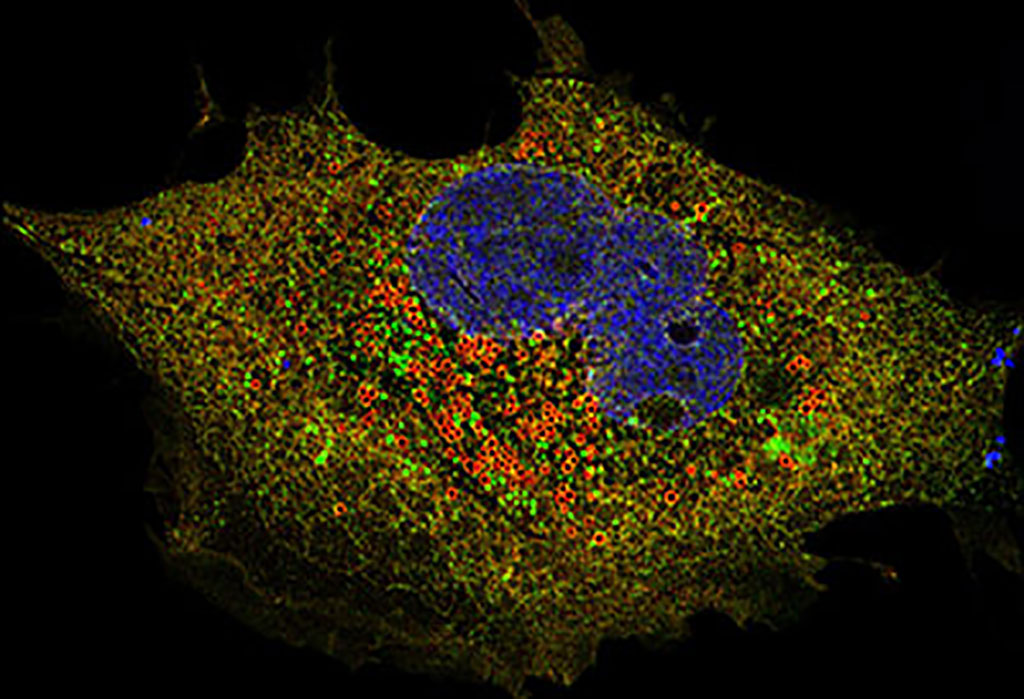 Image: SARS-COV-2 Orf6 protein (red) in a mammalian cell (Photo courtesy of Dr. Zhe Han)
Researchers have identified the most toxic proteins made by SARS-COV-2 and then used an FDA-approved cancer drug to blunt the viral protein’s detrimental effects, thus opening the door to testing more effective drugs for treating COVID-19 patients.

In their experiments in fruit flies and human cell lines, the team of researchers at University of Maryland School of Medicine (UMSOM; Baltimore, MD, USA) discovered the cell process that the virus hijacks, illuminating new potential candidate drugs that could be tested for treating severe COVID-19 disease patients.

SARS-COV-2 infects cells and hijacks them into making proteins from each of its 27 genes. The team introduced each of these 27 SARS-CoV-2 genes in human cells and examined their toxicity. They also generated 12 fruit fly lines to express SARS-CoV-2 proteins likely to cause toxicity based on their structure and predicted function. The researchers found that a viral protein, known as Orf6, was the most toxic killing about half of the human cells. Two other proteins (Nsp6 and Orf7a) also proved toxic, killing about 30-40% of the human cells. Fruit flies that made any one of these three toxic viral proteins in their bodies were less likely to survive to adulthood. Those fruit flies that did live had problems like fewer branches in their lungs or fewer energy-generating power factories in their muscle cells.

For the remaining experiments, the researchers focused on just the most toxic viral protein, so they could figure out what cell process the virus hijacks during infection. The team found that the virus’ toxic Orf6 protein sticks to multiple human proteins that have the job of moving materials out of the cell’s nucleus - the place in the cell that holds the genome, or the instructions for life. They then discovered that one of these human moving proteins, targeted by the virus, gets blocked by the cancer drug selinexor. The researchers tested selinexor on human cells and fruit flies making the toxic viral protein to see if the drug could help reverse the damage. Selinexor, like many cancer drugs is itself toxic. However, after accounting for its toxic effects, the drug improved human cell survival by about 12%. Selinexor prevented early death in about 15% of the flies making the toxic viral protein. The drug also restored branches in the lungs and the energy-generators in the muscle cells. Selinexor is FDA-approved to treat certain blood cancers.

“Our work suggests there is a way to prevent SARS-COV-2 from injuring the body’s tissues and doing extensive damage,” said senior author of the study Zhe “Zion” Han, PhD, Associate Professor of Medicine and Director of the Center for Precision Disease Modeling at UMSOM. “More than 1,000 FDA-approved drugs are in clinical trials to test as treatments for COVID-19, and luckily a trial testing selinexor, the drug used in our study, is being performed already. If this trial proves to be successful, our data will have demonstrated the underlying mechanism for why the drug works.”

“Although we now have vaccines, it may still be a while before we will have COVID-19 infections under control, especially with the new variants emerging,” added Albert Reece, MD, PhD, MBA, Executive Vice President for Medical Affairs, University of Maryland Baltimore, and the John Z. and Akiko K. Bowers Distinguished Professor and Dean, University of Maryland School of Medicine. “We will need to tap into every tool in the arsenal available to protect people from needless sickness, disability or even death, and this study guides us towards a new target for potential therapeutics.”

University of Maryland School of Medicine