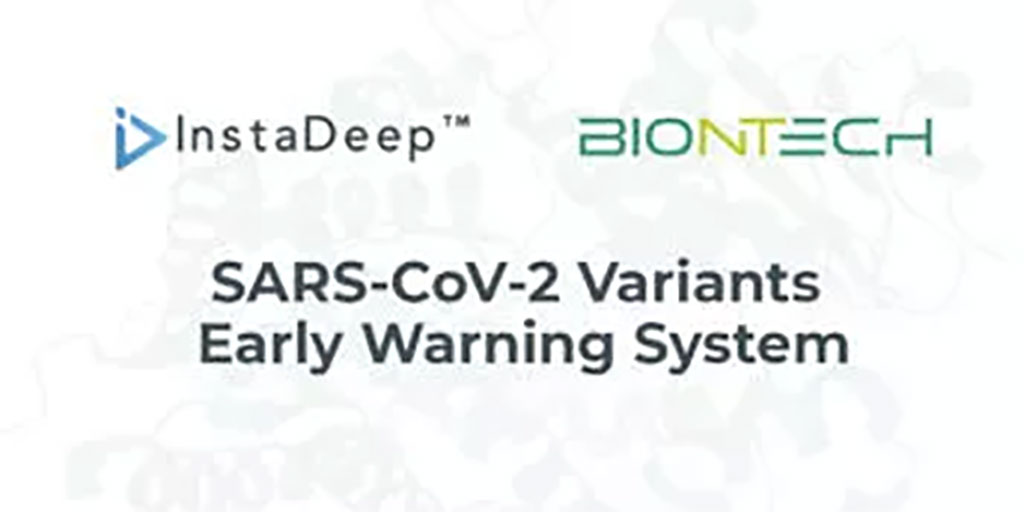 BioNTech SE (Mainz, Germany) and InstaDeep Ltd. (London, UK) have developed a new computational method that analyses worldwide available sequencing data and predicts high-risk variants of SARS-CoV-2. The EWS developed in collaboration by BioNTech and InstaDeep is based on AI calculated immune escape and fitness metrics. The new method combines structural modeling of the viral spike protein and AI algorithms to quickly flag potential high-risk variants entered into SARS-CoV-2 sequence data repositories within less than a day based on metrics scoring their fitness (e.g. ACE2 and variant spike protein interaction) as well as their immune escape properties.

The EWS relies on two approaches: (1) structural modeling of the interaction of the viral spike protein receptor-binding domain (RBD) with the host cell receptor and scoring the impact of the virus variant in escaping the immune response, and (2) AI-based predictive modeling to extract information from hundreds of thousands of registered virus variants from global sequence repositories. The EWS computes an immune escape score and a fitness (transmissibility potential) prior score. While the immune escape score alone was already highly predictive of the risk, combining these two metrics into a Pareto score provided the best assessment of the risk posed by a given virus variant. The higher the score, the higher the risk of the variant impacting global health. The EWS approach ranks SARS-CoV-2 variants for immune escape and fitness potential based solely on existing data, and therefore is not dependent on a “wait-and-watch” approach.

The companies validated these predictions using experimental data generated in-house and publicly available data. During the trial period, the system identified >90% of the WHO-designated variants (Variants of Concern, VOC; Variants of Interest, VOI; Variants Under Monitoring, VUM) on average two months in advance. WHO-designated variants Alpha, Beta, Gamma, Theta, Eta and Omicron were detected by the EWS in the same week its sequence was first uploaded. The Omicron variant was ranked as a high-risk variant the same day its sequence became available. The IHU variant observed in France has also been evaluated by the EWS, which highlighted immune escape properties that are relatively similar to Omicron but with significantly lower fitness, making it less of a concern given current data. The results from the study underline that the EWS is capable of evaluating new variants in minutes and risk monitoring variant lineages nearly in real-time. It is also fully scalable as new variant data becomes available.

“With the advanced computational methods we have been developing over the past months we can analyze sequence information of the Spike protein and rank new variants according to their predicted immune escape and ACE2 binding score,” said Ugur Sahin, M.D., Chief Executive Officer and Co-Founder of BioNTech. “Early flagging of potential high-risk variants could be an effective tool to alert researchers, vaccine developers, health authorities and policy makers, thereby providing more time to respond to new variants of concern.”

“More than 10,000 novel variant sequences are currently discovered every week and human experts simply cannot cope with complex data at this scale. We’ve addressed this challenge by deploying the powerful AI capabilities of InstaDeep’s DeepChain platform combined with BioNTech’s SARS-CoV-2 know-how and technology. For the first time, high-risk variants could be detected on the spot, potentially saving months of precious time. We are happy to make our research work publicly available and, most importantly, look forward to its continued real-world impact,” added Karim Beguir, Co-Founder and CEO of InstaDeep.