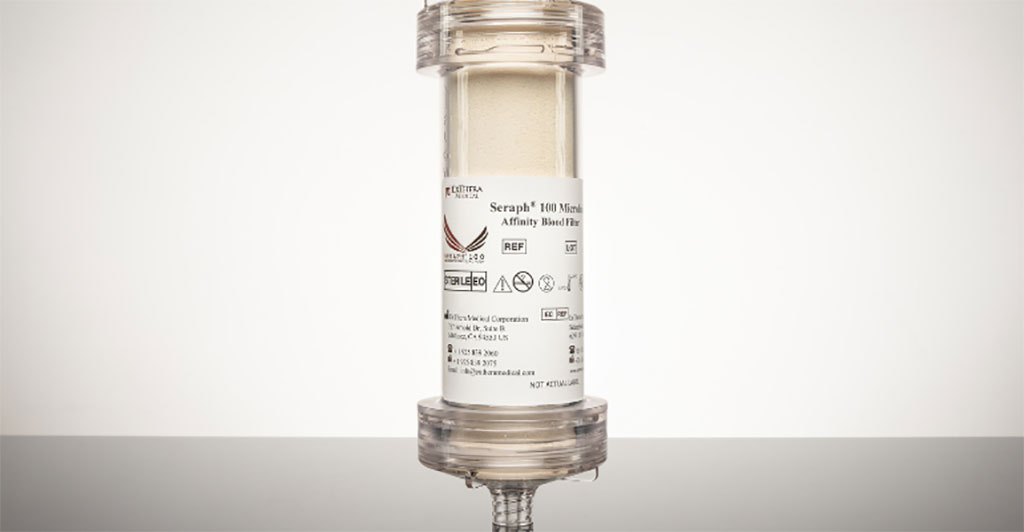 Critically ill patients treated with a blood purification device within 60 hours of ICU admission experienced a survival rate double that of patients treated after being in the ICU for 60 or more hours, according to a newly released study.

The study found that survivability in ICU COVID patients that began treatment with ExThera Medical Corporation’s (Martinez, CA, USA) Seraph 100 Microbind Affinity Blood Filter within 60 hours of ICU admission was 65.5% while it was 37.5% in patients that started the treatment after more than 60 hours in the ICU. Seraph 100 is the first blood purification device to be shown to reduce both bacterial and viral loads in the bloodstream and has been used on more than 800 US and EU patients with COVID-19 since April 2020. The Seraph 100 is CE marked and commercially available in the EU and has FDA Emergency Use Authorization (EUA) for treatment of COVID-19 in the USA.

As a patient's blood flows through the Seraph 100 filter, it passes over beads with receptors that mimic the receptors on human cells that pathogens target when they invade the body. Harmful substances are quickly captured and adsorbed onto the surface of the beads and are thereby subtracted from the bloodstream. Seraph adds nothing to the bloodstream. It targets the pathogens that cause the infection, while it also binds and removes harmful substances generated by the pathogen and by the body’s response to the infection. Seraph’s adsorption media (the beads) constitute a flexible platform that uses immobilized (chemically bonded) heparin for its well-established blood compatibility and its unique ability to bind bacteria, viruses, fungi, and important sepsis mediators reported to contribute to organ failure during sepsis.

“Few treatments are available for critically ill COVID patients in the ICU. We have already seen data that demonstrates survival improvement1 – and now additional peer-reviewed data was generated that demonstrates ‘earlier is better’ when it comes to Seraph 100 use in the ICU,” said Robert Ward, ExThera Medical Chairman. “In addition, patients treated earlier in their ICU with the Seraph 100 may avoid intubation and mechanical ventilation.”