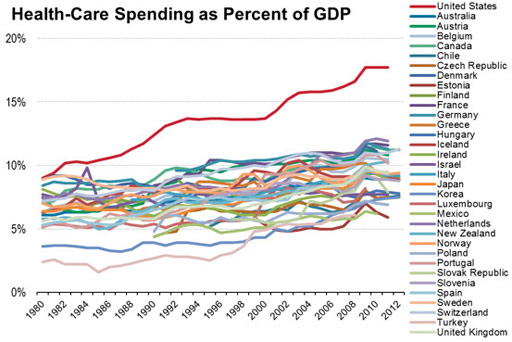 Image: A graph showing healthcare spending as portion of GDP (Graph courtesy of OECD).
Twenty conditions make up more than half of all spending on healthcare in the United States, according to a new financial study that examined spending by diseases and injuries.

Researchers at the Institute for Health Metrics and Evaluation (IHME; Seattle, WA, USA), the World Bank (Washington DC, USA), and other institutions conducted a study to track spending on personal and public healthcare in the United States between 1996 and 2013, which totaled USD 30.1 trillion. In all, the researchers reviewed 183 sources in order to estimate spending for 155 conditions, including cancer, which was further disaggregated into 29 conditions. The main outcomes and measure were U.S. national spending estimates, stratified by condition, age and sex group, and type of care.

The most expensive condition, diabetes, cost USD 101 billion in 2013 alone in diagnoses and treatments, growing 36 times faster than the cost of ischemic heart disease, the number-one cause of death and the second most expensive condition, over the past 18 years. Lower back and neck pain, hypertension, and injuries from falls comprised 18% of all personal health spending. Other conditions among the top 20 include musculoskeletal disorders, such as tendinitis, carpal tunnel syndrome, and rheumatoid arthritis; pregnancy and postpartum care; and respiratory infections, such as bronchitis and pneumonia.

Other key findings are that women ages 85 and older spent the most, at more than USD 31,000 per person, with 58% spent at nursing facilities, and the rest expended on cardiovascular diseases, Alzheimer's disease, and falls. Men ages 85 and older spent USD 24,000 per person, with only 37% on nursing facilities, largely because women live longer and men more often have a spouse at home to provide care. The study was published on December 27, 2016, in Journal of the American Medical Association (JAMA).

A recent report by the U.S. Centers for Medicare & Medicaid Service (CMS, Baltimore, MD, USA) projects an average 5.8% annual growth rate in healthcare expenditure, 1.3% faster than annual growth in the gross domestic product (GDP). As a result, health expenditure is expected to increase to 20.1% by 2025. Overall, national health expenditures are estimated to have reached USD 3.2 trillion in 2015, or just over USD 10,000 per year for every man, woman, and child.

Institute for Health Metrics and Evaluation