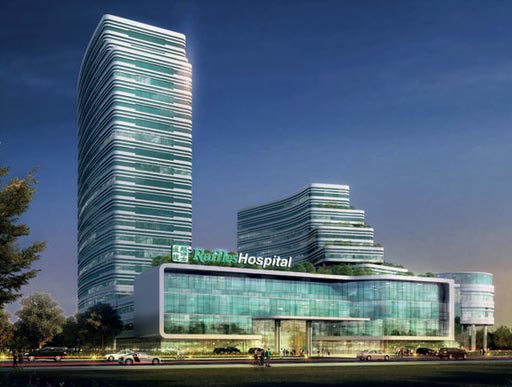 When completed, the international Raffles Hospital Chongqing will be able to serve local and expatriate patients in the western part of China, as well as foreign patients from Central Asian republics. The new 700-bed capacity hospital and the soon to be completed 400-bed capacity Raffles Hospital Shanghai are expected to start operations at the end of 2018 with 200 private beds each. Raffles Medical clinics in Chongqing, Shanghai, Beijing, Nanjing, Tianjin, Dalian, and Shenzhen, which have access to the Raffles Medical network, will feed into the two new China hospitals.

Raffles Medical Group, which is based in Singapore, currently operates in 13 cities across Asia, and has announced plans for two new hospitals in Beijing and Shenzhen, and is considering a third. The medical group currently holds representative offices in Indonesia, Vietnam, Cambodia, Brunei, Bangladesh, and the Russian Far East, as well as business associates throughout the Asia Pacific region.

“We have done our market survey, and found that the top 10% of 33 million people in Chongqing can afford internationally priced health care,” said Loo Choon Yong, MD, executive chairman of Raffles Medical Group. “Together with the upcoming Shanghai hospital, we will be a major player in tertiary hospital services in China, where there is significant demand for good quality healthcare from locals and foreigners.”

The State Council of the People’s Republic of China (Beijing; www.gov.cn) announced in June 2015 that it will reduce bureaucratic red-tape for new facilities. Among other measures, private-capital-invested hospitals will be integrated into the medical insurance system, a move designed to encourage the development of new medical institutions. The State Council also stipulated that public health insurance will extend healthcare coverage to qualified private facilities, and will not be able to reject them for reasons other than their medical service abilities.