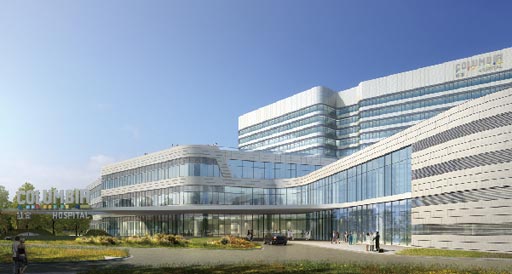 The hospital, which is expected to open in 2019, is located in the Jiaxing Economic and Technological Development Zone. Once completed, it will have a construction floor area of 120,000m2 with 500 beds; 10 operating theatres; six labor, delivery, recovery and postpartum (LDRP) rooms; and advanced diagnostic equipment. The hospital, which is being constructed at a cost of USD150 million, will serve a population of 4.5 million people who demand quality healthcare services. Patients will be able to use their public and commercial medical insurance.

“Columbia China broke ground on the new hospital today just eight months after acquiring the land; the speed is unprecedented and unheard of in China for a foreign hospital investment,” said Bee Lan Tan, President and CEO of Columbia China. “This would not have been possible without the commitment and efficiency of the Jiaxing government. Columbia China remains dedicated to bringing more international talent and resources to Jiaxing, so that the needs of the local population can be well served.”

“Columbia China strives to deliver the highest level of healthcare quality and service by putting patients at the center of everything we do,” said Nate McLemore, managing director of Columbia Pacific Management. “We are excited to open a hospital in Jiaxing, and are extremely committed to delivering world-class care across China with Columbia China hospitals and Cascade (Kaijian) senior living.”

Columbia Pacific Management has been operating in Asia for 20 years, opening its first hospital in Malaysia in 1996; the network now includes 27 hospitals and two clinics. In 2011 the firm became the first foreign-owned company to receive permission from the Chinese government to build senior care facilities and operates three such facilities, one in Beijing and two in Shanghai. Columbia Pacific also owns a 220-bed orthopedic hospital and two multi-specialty clinics in Shanghai, and is developing two other hospitals in Wuxi and Changzhou.