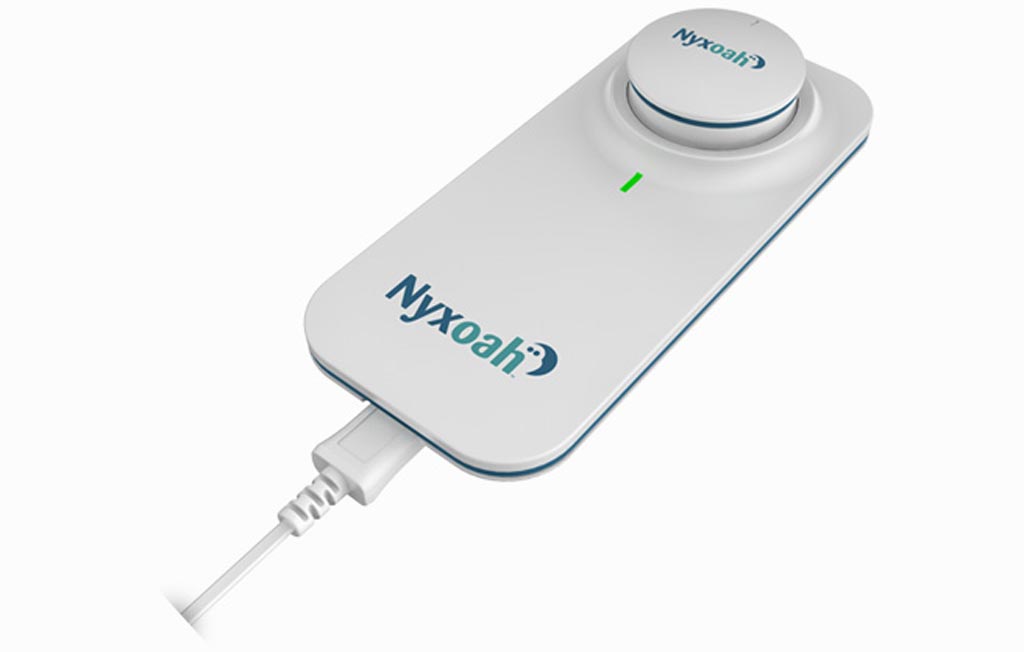 The Nyxoah (Mont-Saint-Guibert, Belgium) Genio Implantable Stimulator (IS) system is intended for the treatment of OSA patients not suitable for conventional continuous positive airway pressure (CPAP) therapy. The system consists of two elements, a 20x2.5 mm implant placed close to the nerves that innervate the tongue muscle (under the chin), which is performed during a short outpatient procedure, and a disposable 55x90 mm patch with a wireless activation chip/battery worn on the chin. Once placed, the implant does not migrate, and has a lifetime of at least 12 years.

Before going to sleep, the patient places the disposable adhesive battery patch to deliver energy to the implant. The patch has enough power to activate the implant for a full night sleep session, stimulating the hypoglossal nerves of the tongue and making them contract and prevent obstruction of the airway. The activation patch is removed every morning for recharging. The system is expected to be magnetic resonance imaging (MRI) conditional, allowing patients to undergo MRI scans under specific conditions and also operate with other implanted devices such as pacemakers.

“International sleep experts recently estimated that nearly one billion people worldwide suffer from sleep apnea. Existing therapeutic solutions are often not accepted or are poorly tolerated by patients,” said Robert Taub, chairman of the board of Nyxoah. “The sleep community is looking for alternative solutions for OSA patients who refuse currently available therapies, or are not compliant. The Genio system will help many OSA patients in need for a better solution.”

OSA is a sleep disorder characterized by pauses in breathing or instances of shallow or infrequent breathing during sleep. Each pause in breathing (apnea), can last from at least ten seconds to several minutes, and may occur 5-30 times or more an hour. OSA is often diagnosed with an overnight sleep test called a polysomnogram. Structural features, low muscle tone, and soft tissue around the airway give rise to the obstructed airway. The risk of OSA rises with increasing body weight, active smoking and age. In addition, patients with diabetes have up to three times the risk of having OSA.